Want to take a quick trip to beaches with sunshine and palm trees? Arby’s is flying 10 consumers to Hawaii to promote their King’s Hawaiian Sandwiches.

The strategic partnership between King’s Hawaiian and Arby’s led to three limited-time, Hawaiian-themed sandwiches. To promote these new products, the Arby’s/King’s Hawaiian partnership devised a competitive promotion, which encouraged consumers to sign up and buy a trip to Hawaii for only $6, the cost of a new Arby’s King’s Hawaiian sandwich.

The first 10 consumers who register for the trip online will be flown to Honolulu, courtesy of Arby’s and King’s Hawaiian, will indulge in the Luau Chicken, Big Kahuna and Smokehouse Brisket sandwiches during the six hours they spend in paradise.

The promotion, which will fly 10 consumers to the beach, has two offer periods. The first offer period launched at noon ET on April 12 and lasted until 11:59 that evening. The second launches at noon on April 15. To purchase the trip (and the sandwich), consumers will need to provide contact information and payments of $6 each or the redemption code “ALOHA.”

The 10 consumers who were first to register during the allotted times will fly coach to Los Angeles International Airport on April 26, 2019, where they will enjoy a hotel stay. The next day, the consumers will fly business or first-class to Honolulu, Hawaii to participate in a marketing video shoot for Arby’s and King’s Hawaiian. Consumers will each receive a $150 gift card to cover expenses and a $500 check, which brings the total value of each trip to roughly $2,700. 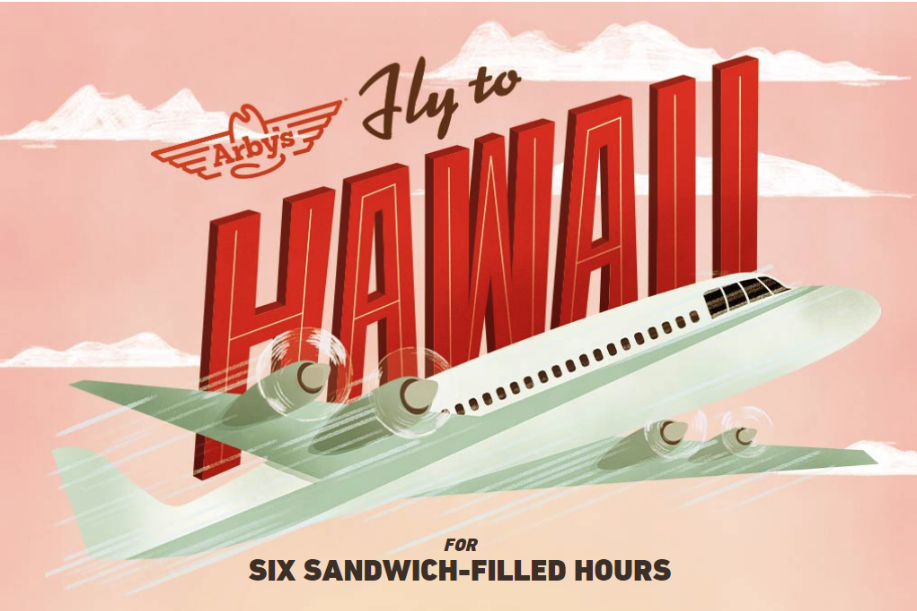 Providing the ultimate blend between Arby’s and King’s Hawaiian, the engaging contest allows consumers to see and experience the location that inspired King’s Hawaiian products and the new Arby’s sandwiches.

This special promotion provokes a sense of urgency by encouraging consumers to register as quickly as they can to purchase a highly discounted trip. With a running countdown to the registration times on the Arby’s site, consumer attention is drawn to the “purchase tickets” call-to-action. While the contest is open to the public and anyone can win, the number of consumers able to fly to Hawaii is limited to an exclusive 10 individuals.

This marketing initiative taps into consumer psychology by tempting consumers with a free trip to paradise — palm trees and sandwiches included.