Foreign. Funny looking. Small. The Volkswagen Beetle was once a dusty import from Europe, trying to find its way during the 1950’s heyday of enormous, flashy cars. It would go on to become an American icon. The grooviest, coolest, most laid-back ride on the road. The Beetle is being retired in 2019 — 80 years since its inauspicious start as the German “people’s car” (Volks Wagen). We look back at the feisty little car that could, and the ad campaign that was a stroke of marketing genius.

Originally introduced in 1938 and developed by Porsche, the Beetle wouldn’t gain popularity in the United States until the late 1950s; when its fate as a strange looking tiny car, linked to negative feelings about Germany at the time, was changed forever by the most creative ad agency on Madison Avenue: Doyle Dane Bernbach (DDB).

William Bernbach was different than anyone else in advertising when his firm DDB rose to prominence. His idea that the art, typography and content should form one cohesive idea was revolutionary and would change the world of advertising, and how marketing campaigns were created, forever. DDB was known for smart, catchy, soft-sell campaigns that trusted the audience to understand the message. This approach was very appealing to VW, and a deal was formed between the two companies that would last for decades. 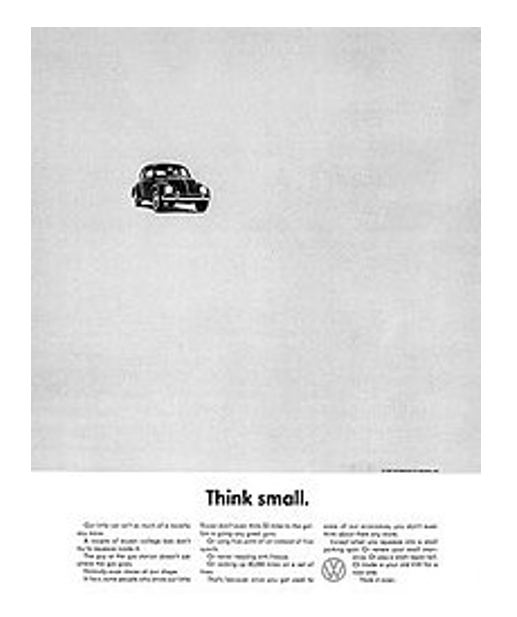 “Think Small” it said. A nearly blank page. Cluttered, wordy copy. A logo smushed in at the bottom as an afterthought. And a lone car in the distance, staring off the page. The Beetle had arrived.

Because VW was none of the things that the big cars of the time were – flashy, fancy or fast – their ads couldn’t be either. DDB saw this as an advantage. Their simple campaigns told a story, while also highlighting the distinctive shape of the Beetle. They stood alone, because they stood alone in the market. No one was making anything like them, so there was no need for flashy superlatives. Just the story. And always with a self-deprecating twist that poked gentle fun at the car’s unique characteristics, but also highlighted the owner who took a chance and reaped the financial, mechanical and cultural rewards. You don’t need the latest trend, you already have the coolest car. You don’t need a gas guzzler, you’re too frugal for that. The ads trusted the customer to make the right choice when given the right information. They didn’t condescend.

In 1999, Ad Age would call it the top ad campaign of the century.

The ad was so innovative that customers would look for the latest ads. How would these simple advertisements manage to be audacious, funny, informative and silly time after time? Most importantly: They were effective. By the 1960s, the Beetle was the best-selling imported car in America. By 1970, it had sold 570,000 units, 568,000 more than in 1949.

Even Mad Men gave the ad a shout out in the first season, showing its lasting cultural influence and the game-changer it was for marketing and advertising in the 1960s. 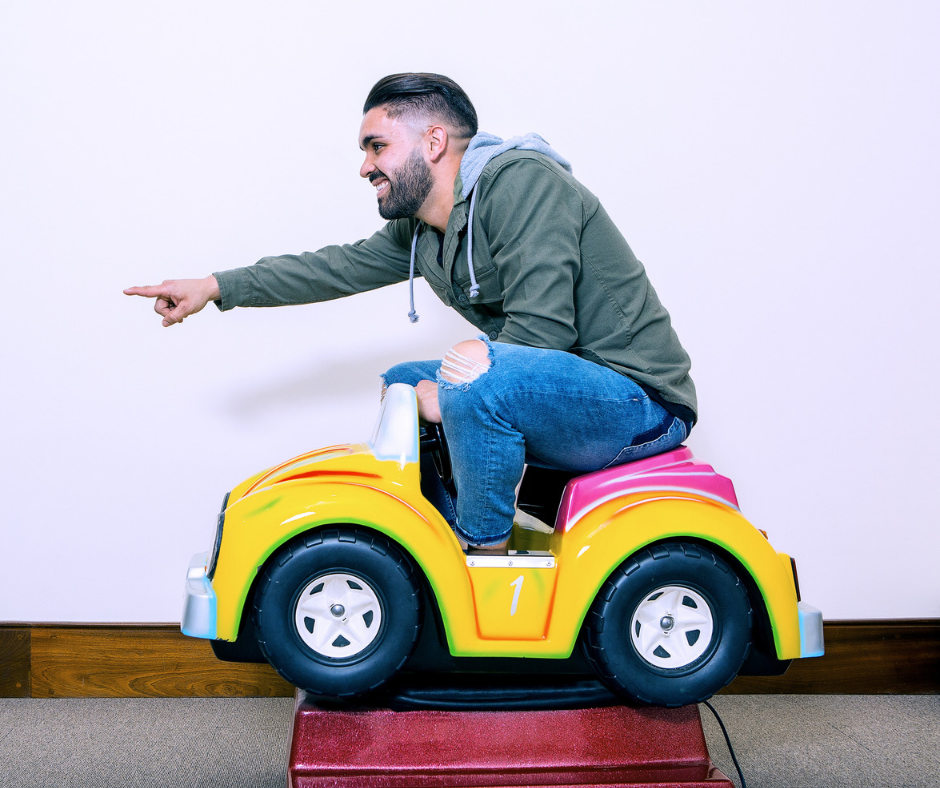 Although the initial “Think Small” advertisement was a big risk, the format would stand the test of time. Usually, three columns of text and a black and white photograph. But only the Beetle could call itself a lemon and get away with it, or use Wilt Chamberlain as the anti-spokesperson, who at 7-feet did not fit inside the car. Unexpected images made their way into the ads as well, like the lunar module that made a guest appearance in a Beetle advertisement after its trip to the moon, boasting “It’s ugly, but it gets you there.”

The End of the Road

VW stopped production of the Beetle in the 1970s, but would reintroduce it in 1998. Mike Myers drove a groovy version in, Austin Powers: The Spy Who Shagged Me (1999), painted in the now iconic psychedelic colors and swirls of the 1960s. The Beetle would gain popularity again, with buyers placed on a waiting list, spurred by the baby boomers nostalgic for their youth.

With current sales down to just 15,000 units sold in 2017, VW will stop production again, after releasing two final versions. As for yet another re-launch someday, the CEO of Volkswagen Group of America says “never say never.” We can only hope that any future Beetles would hit the scene with a marketing campaign as explosive to the industry as the Think Small ad, which launched a creative revolution.