Rebrands are usually reactions to marketplace trends, like when Apple unveiled their “flat” logo, though some are completely internal actions to shift business objectives. Let’s take a look at some rebrand stories.

In 2016, Guinness rebranded from their 2005 flat logo, which was a trend Apple started with a significant rebrand of their own. With the objective to give their logo new life and character, Guinness opted for an ornate style.

Guinness focused on their brand’s core values, one of which was patriotism for the Republic of Ireland, for their logo design. The Guinness logo shares the country’s national emblem: the harp.

By adding notable detail into the beer brand’s logo, it became a blueprint for harp construction. It’s important to note the harp portion of the new logo is two times the size of the older logo, so the added detail is easily seen. The logo’s new identity is meant to prove Guinness’ attention to detail and commitment to their craft.

Before 2010, Old Spice was type-cast. Perfect for the older man in your life, Old Spice primarily reached an elderly market and was labelled far from youthful, sexy or spontaneous.

With a neutral reputation, Old Spice was neither good nor bad, but in 2010, the brand decided to exceed expectations.

With the help of athlete and actor Isaiah Mustafa, Old Spice reached a new and more diverse audience with its production of the rebrand-specific TV spot featured below. This fast-paced, witty and alluring campaign inspired a series of videos from Old Spice. With each spot, the brand got younger and younger, appealing to a broader range of men and women.

After being adopted by a musical group and outlawed by private businesses across the U.K. in the 1970s, Burberry’s classic plaid print held a damaged reputation. A knock-off Burberry print had been supported by individuals dabbling in drug scandals and unlawful activities, leading consumer support of Burberry to drop off. BBC noted, “Quite a lot of people thought that Burberry would be worn by the person who mugged them.”

The Burberry brand needed a revamp to dispel any negative connotations. The brand stayed true to its main principles: its history and its fashion. Burberry had always been known for being British and being plaid but in the early 2000s, they would introduce innovation.

The Burberry website now displays a sleek, interactive view of the brand’s timeline from 1856 to 2018, reminding consumers that their history is an influential factor in their fashion. Burberry also spiced up their marketing campaigns and toned down their use of plaid with celebrity endorsements, using British models and actors, like Kate Moss (2005), Emma Watson (2009) and later Matt Smith and Cara Delevingne (2017), to prominently display their hats, shoes and everything in between. Popular celebrities added a contemporary and approachable feel to the brand’s sophistication.

Fighting back against a lawless notoriety seemed to be a battle, but it proved to be an easy feat for Burberry, once again known as a chic, high-brow label.

Apple’s very first logo was a drawing of an apple tree, which eventually progressed to the 1997 rainbow apple. In the late 90s, Apple decided the rainbow logo had had a good run of 22 years and retired the design to make way for sleeker branding.

Apple needed to maintain an image that represented a brand at the forefront of the tech industry, which was no longer represented in their rainbow apple. In 1998, Apple revealed their monochrome logo, keeping its iconic shape (the apple with a bite taken out of it).

The logo then shifted from the blue shade shown below to black and then again to aqua in 2001 before becoming the chrome logo we’re used to seeing slapped on the back of the latest tech devices today. Apple’s new “flat” logo, as seen for the first time in black below, introduced a shift in industry marketing, which inspired logos like Guinness’ 2005 harp.

Earlier this year, IHOP temporarily rebranded to IHOB, which stood for International House of Burgers, including a switch to a new Twitter handle.

The pancake brand abruptly shifted into the burger industry to bring attention to their burger menu, which was a surprise to many consumers who know IHOP to only serve breakfast foods.

In July, IHOB reverted its name back to IHOP and revealed that its IHOB rebranding was a move to garner press and consumer attention for their burgers. IHOP will continue to sell both their burgers and breakfast items. 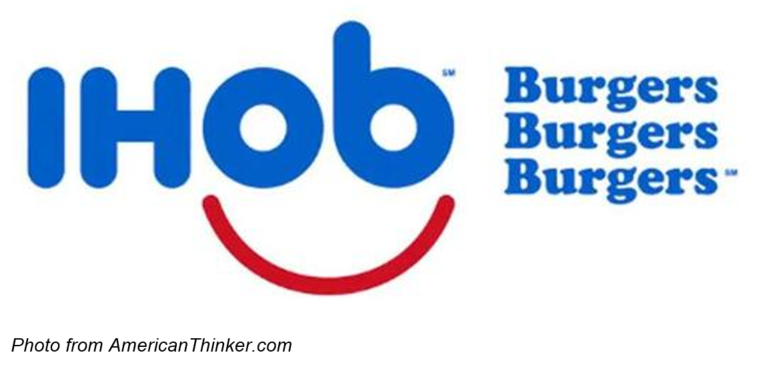 Rebranding can generate quite the buzz and redefine brands consumers love. We’re happy to announce the complete rebrand of Best Rate Referrals, the consumer finance division of Digital Media Solutions.

After nearly 15 years in the industry, Best Rate Referrals has unveiled a new logo and brand identity. This refresh is more than a simple logo swap. As their business continues to evolve, Best Rate Referrals chose to evolve their identity to reflect their offering to a diverse network of lenders in mortgage and beyond. To learn more about the new brand and logo or the marketing services offered by Best Rate Referrals, visit BestRateReferrals.com.