Chipotle is busy with marketing initiatives this month. The brand is giving away $1 million worth of free burritos for their mobile promotion during the NBA season close and celebrating pride.

Chipotle coined the verb “freeting,” which the brand describes as the act of tweeting “free Chipotle during the 2019 men’s professional basketball championship series every time an announcer says the word ‘FREE’ on air during a game.”

In addition, the Chipotle campaign waived the delivery fees for orders placed through the mobile app and through DoorDash during the NBA finals.

Leveraging The NBA Social Following Without Partnering With The NBA

Chipotle is not partnering directly with the NBA, but is still leveraging their event and specifically the concept of second-screen viewing. Mobile Marketer defines second-screen viewing as “the time people spend commenting and checking in on mobile apps like Twitter while watching destination live TV.”

Twitter has reported the NBA is the most talked about professional sports league on the social network, and by promoting free burritos during the NBA finals, Chipotle tapped into the enormous NBA following.

Chipotle CMO Chris Brandt said, “We know that basketball fans are some of the most passionate fans in sports, so we're putting even more, about one million dollars more, on the line by ‘freeting’ through these final games.”

Chipotle tapped into another niche audience and launched limited edition Pride apparel through their Instagram account with the brand’s new slogan, “Love What Makes You Real.” Supporting The Trevor Project, a nonprofit providing crisis intervention and suicide prevention services for young LGBTQ individuals, Chipotle is donating $10.50 for every shirt and $7 for every hat sold. 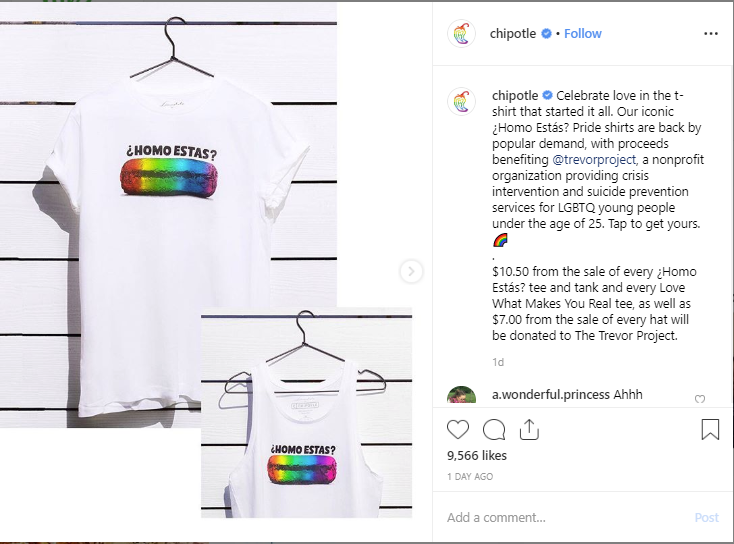 Chipotle is taking multiple initiatives to go digital and target niche audiences. When the brand partnered with DoorDash, it saw a 667% increase in weekly delivery orders. Plus, Chipotle has been updating and promoting their new app and celebrating pride with shoppable Instagram posts. As consumers go digital, Chipotle follows closely.