Google released their March 2019 Core Update earlier this month, and marketers are beginning to see its effects already.

What Is The Google March 2019 Core Update Meant To Do?

Many are speculating this update was meant to reverse a previous update released in August 2018, which negatively impacted medical and health-related sites. 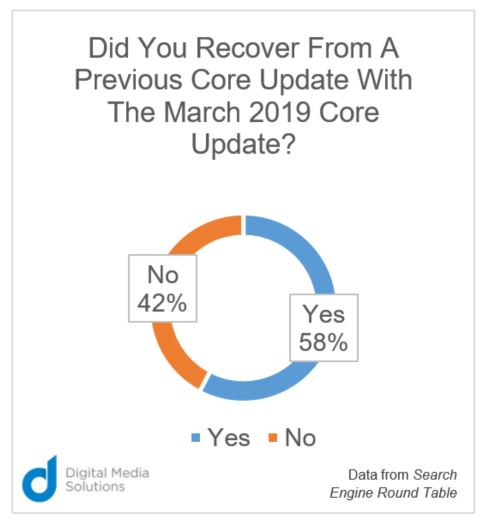 What Search Engine Round Table Says

According to a survey held by Search Engine Round Table, the March 2019 Core Update wasn’t a reversal of the August 2018 update, as less than 60% of affected sites saw recovery.

Search Engine Land acknowledges that many experts may have implemented changes to reverse the medic update, but notes that Google has not confirmed the update’s intentions. The publication released early data on the update’s effects, but it’s hard to measure the update’s full impact just yet.

When contacted about the update, Google said, “We're constantly improving our algorithms and build forward to improve.” This core update is one of many regular and yearly adjustments to the algorithm.

Google also noted, “This was a noticeable update that we felt warranted confirming, in keeping with what we’ve said before. But it is far from being the biggest update Google has ever done.”

This week, we released a broad core algorithm update, as we do several times per year. Our guidance about such updates remains as we’ve covered before. Please see these tweets for more about that:https://t.co/uPlEdSLHoXhttps://t.co/tmfQkhdjPL

What Sites Were Impacted By The Google March 2019 Core Update?

According to the Search Metrics blog, health websites felt the heat from this month’s Google algorithm update. Specifically, some of the health websites that benefited from last year’s Expertise, Authoritativeness, Trustworthiness (EAT) update are now seeing organic traffic slip. Conversely, according to Search Metrics, “websites with a strong brand profile and a broad topical focus” are seeing lifts ― especially for “your money or your life” (YMYL) searches. Lastly, user signals appear to have an increasing impact on search results. This means metrics that demonstrate user value (like time on site) may be more likely to drive positive organic results moving forward.

As expected, Google is remaining vague with its update’s intentions, but experts are tracking data to analyze the update’s impact.