Beginning this summer, search results for shopping queries on Google will include free product listings, instead of paid ads. Google has recently made several similar changes to their shopping search functions, likely in a bid to stay competitive with ecommerce giants like Amazon. 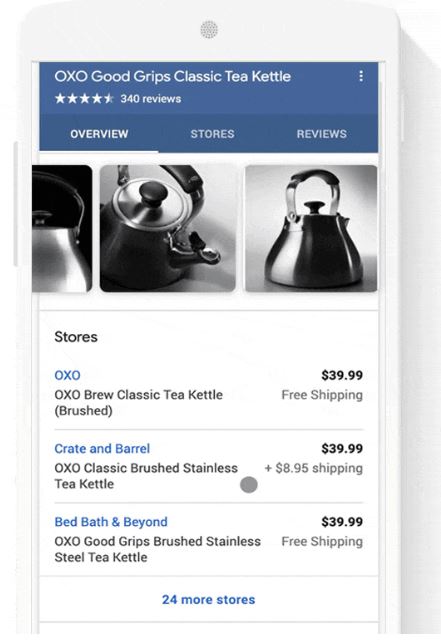 In the latest move from Google to leverage their search business, and create relevancy in other verticals, the tech company is swapping paid ads to free product listings when users perform shopping searches. Typically, the items that appeared in the product knowledge panel from a shopping search were paid ads, now the results will be free listings.

“We want to make sure we’re helping expand access to digital commerce to merchants of all sizes,” said Bill Ready, President of Commerce at Google. “Larger merchants can make valuable inventory that was previously sitting on their shelves more accessible. And small businesses can better compete in the world of e-commerce.” Ready called the move a way of “democratizing access” for merchants.

Is The Free Google Shopping Listings Change The Only Recent Change To Google’s Ecommerce Functions?

No. In April, Google announced a change to their Google Shopping tab that prioritized unpaid listings picked by the Google algorithm, instead of paid product listings. The move was made at the height of quarantines around the U.S., with Google expressing the desire to “help merchants better connect with consumers,” whether the retailers were Google advertisers or not.

TechCrunch notes that while the changes to the Google Shopping tab were moved up in order to help people and businesses during the crisis, the switch was also another way for Google to make in-roads in ecommerce and be a viable competitor against big ecommerce names like Amazon. According to AdAge, the Google Shopping changes in April “led to a 70% increase in clicks and a 130% increase in impressions across both free listings and ads on the Shopping tab.”

Similarly, the upcoming switch to free shopping listings on the Google search page could increase the amount of users searching directly within Google, instead of inside other ecommerce sites. With Google dominating search around the world, consumers may see Google shopping results as a handy one-stop shopping solution.

Certainly not. The free shopping listings are an enhancement to Google search, not a total replacement of paid shopping ads. Paid ads will still appear at the top of Google search results in the usual way, designated like typical Google ad units. However, as TechCrunch points out, the added competition from free listings could require digital marketers to increase their advertising in order to find a way to stand out in the, now bigger, crowd. The changes to Google’s shopping search results will begin on mobile this summer and be widely rolled out in the coming year.