Like the Super Bowl, the Olympics are often beloved for their funny and inspiring commercials, and this year is no exception. Many brands rolled out new commercials as part of multichannel campaigns, with an estimated $3 billion in sponsorships racking up for the 2020 Tokyo Olympics, reported Marty Swant for Forbes.

Commercials that air during the Olympics, even if they aren’t about the Olympics, often move audiences, capitalizing on good feelings and driving engagement. Accordingly, recent testing from consulting firm Kantar found that “Ads honoring those who are positively changing the world (typically by depicting inspiring Olympic moments)” and “ads portraying the Olympics as a sign of moving forward [after the pandemic] performed very well on both breakthrough potential and driving long-term brand impact.”

Big budgets and significant planning go into sponsorships and commercials tied to events such as the Olympics, but many marketers (and CFOs!) question the value of such investments. Sponsorships and commercials deliver brand awareness, but can they lead to customer acquisition? The examples below demonstrate how Olympic advertising coordinated with multichannel promotions can deliver success.

The familiar sound of the Bugler’s Dream, the timpani and brass fanfare used throughout the Olympics for much of the last 50 years is so synonymous with the Olympic games 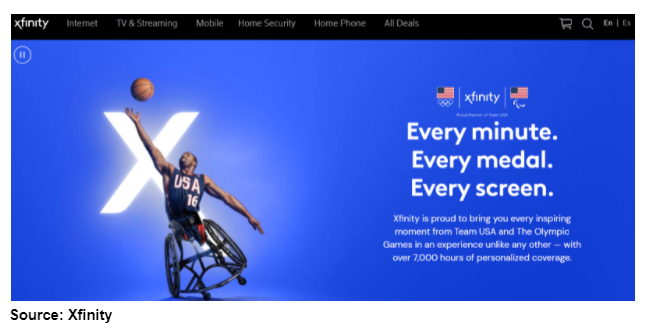 that Xfinity decided to create a multichannel campaign celebrating the familiar theme song. Xfinity, a subsidiary of Olympics sponsor Comcast, deployed “The Song,” a commercial featuring a little girl conducting diverse groups of people humming the Bugler’s Dream. The Song began airing ahead of the Olympics.

Along with the stirring commercial, Xfinity “kicked off a companion TikTok challenge, #XfinityFanthem, in which [Xfinity] encourages creators on the platform to share their own renditions of ‘Bugler’s Dream,’” according to reporter David Cohen for Adweek. #XfinityFanthem launched on July 22, and several prominent athletes and creators are already participating. A compilation of the best #XfinityFanthem entrants will air in a spot set to run during the Olympic closing ceremonies.

By tapping into the power of creators and the popularity of short-form video and TikTok, Xfinity may be able to expand their subscriber base of opted-in subscribers willing and ready to hear from Xfinity about promotions designed to boost subscriber acquisition.

Ally Bank, although not an official sponsor of the Olympics, created “The Unsponsored,” a 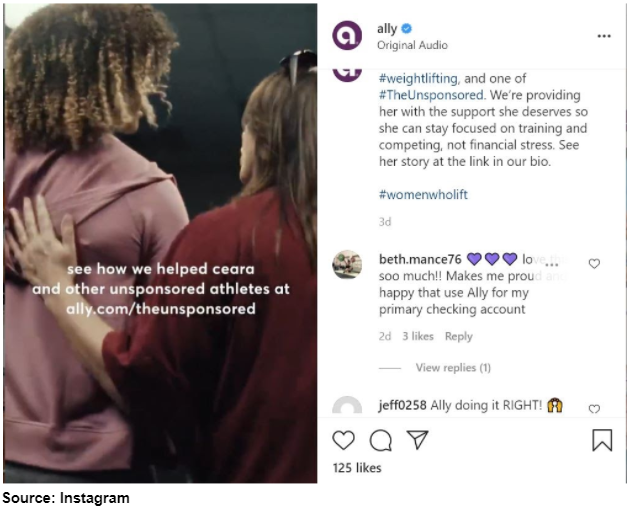 multichannel campaign highlighting athletes who train for the Olympics without sponsors. Ally committed $250,000 in financial support to 20 unsponsored, Olympic hopefuls. “We’re bringing the stories of the unseen and the unsponsored to the forefront, because we want others to recognize the bravery and tenacity of these athletes – even when they have little financial support, they just don’t give up,” said Andrea Brimmer, CMO of Ally Bank

“The Unsponsored” highlights three unsponsored athletes in a series of short film spots directed by award-winning filmmaker Daniele Anastasion. The spots can be seen on YouTube, Hulu, across national media and on the Ally Bank website, where visitors to the site will also find other resources available to support athletes. (Other unsponsored athletes chosen by Ally are also featured, via user-generated content, across Ally’s social channels, including Instagram.)

For many fans of the Olympics, cheering on the underdog is the true spirit of the Games. By driving this empathetic audience to its website via the effective creative and messaging of The Unsponsored campaign, Ally is able to align brand building with customer acquisition, encouraging consumer actions and conversions.

Long-time Olympic sponsor Procter & Gamble (P&G) once again created a campaign that captures the goodwill and unity many associate with the Olympics. The “Lead With Love” campaign from P&G features two commercial spots and a short-film series. Brand purpose is an integral part of P&G advertising, often emphasizing themes of kindness, equality, humanity and respect, and the Olympics advertising is a perfect platform for these impactful messages.

“As Olympic dreams become a reality, the moments that shine brightest will once again celebrate more than athletic performance: showing respect, extending kindness and compassion, and doing the right thing even when it’s the hard thing,” explained P&G about the extended commercial “Love Leads to Good.” The other Olympic spot from P&G, “Your Goodness is Your Greatness” features Olympic and Paralympic athletes “using their voices and their platforms to make a positive difference in their communities.” And, the film series Good is Gold tells the stories of athletes taking action against bias and inequity.

P&G also announced, in conjunction with the Lead With Love Olympic campaign, the recipients of its Athletes for Good Fund. Started when the Olympics were canceled last summer, the fund awards grants to athletes making a difference in their communities and “leading with love.” Brands like P&G, that are able to effectively share their messages of social responsibility, are often able to connect with like-minded consumers, encouraging trial of new products and driving lasting brand loyalty.

While beer and exercise don’t often go together, the right spokesperson can make all the difference. 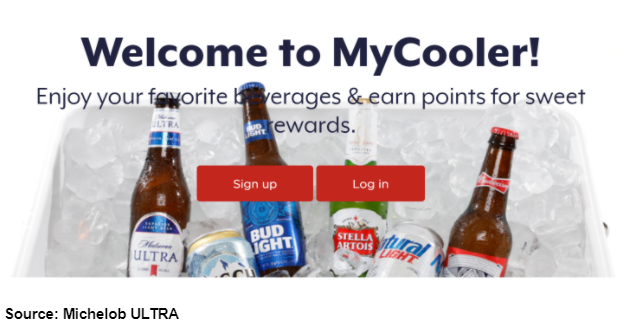 “I've always been someone who has had as much fun off the track as on it, which makes this partnership with Michelob ULTRA so perfect,” said Usain Bolt, eight-time Olympic gold medalist. “I strongly believe in the brand's [Michelob’s] mantra that ‘it's only worth it if you enjoy it,’ and I'm thrilled that we are able to join forces on a program that combines the joy in both exercise and sharing a beer with your friends at the bar.”

Rewards programs that regularly offer incentives and promotions can be effective at building first-party databases of demographic and purchase information, allowing brands to personalize and deliver messages that resonate to audiences ready to purchase.

Brand awareness campaigns can be, at times, considered fluffy. Typically purchased on an impression basis, and often measured based on gut, brand awareness advertising, like the big campaigns centered around the Olympics, is often thought to be more art than science.

But there’s no arguing the value of a strong brand, and when partnered with customer acquisition efforts, like the digital performance advertising solutions offered by Digital Media Solutions, brand awareness campaigns can prove to be very impactful.

Connecting high-intent consumers with the products and services that meet their needs in a way that allows consumers to take immediate action to purchase is the role of digital performance advertising. With the right messaging delivered to the right person at the right time and place, digital performance advertising can leverage the emotions stirred up during the Olympics and encourage decision-making actions or sales.

Are You Looking For Innovative Ways To Connect With & Convert Targeted Audiences?