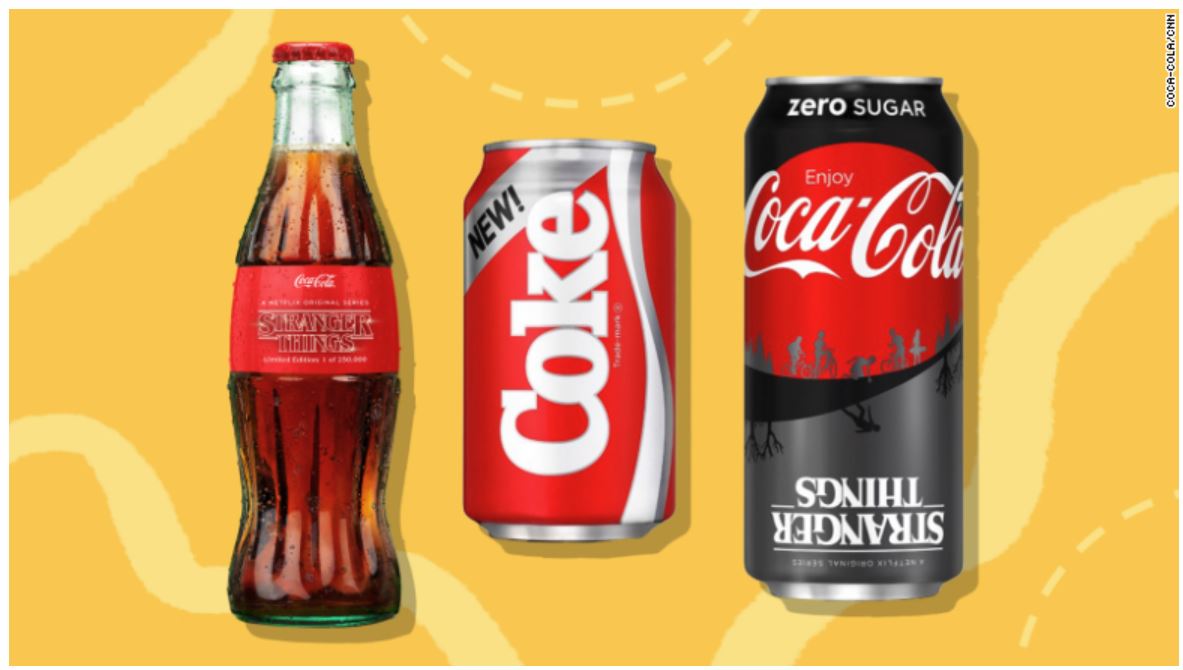 For soda drinkers of a certain age, memories of the New Coke debacle remain a pivotal pop culture moment of their childhoods. Considered among the most catastrophic launches of a new product ever, New Coke faded into obscurity after a mere 79 days, surviving only as a memory of what a brand should never do. Until now.

The duopoly of Netflix and their megahit Stranger Things has teamed up with Coca-Cola to bring back the soda of shame for another go. This time, with all the modern marketing bells and whistles that weren’t available in 1985, among them social media outreach and advertiser alliances – product placements – strategically designed to reach streaming consumers.

The New Coke Relaunch Is A Well-Researched Multichannel Campaign

The relaunch of New Coke isn’t really about selling New Coke. It’s a tactic to generate conversations around Coke products by accessing nostalgic feelings and leveraging the Stranger Things fandom among audiences who have given up commercials in favor of streaming services.

In order to make this partnership more than just a Coke can popping up in a scene, Coke spent many months working with Netflix and Stranger Things creators Matt and Ross Duffer to create a campaign that respects the gravitas of a heritage brand like Coke, while also having fun. According to Coke’s press release, executives from Netflix went to the Coke archives to study the original “New Coke packaging, memorabilia, advertising and more to ensure the script accurately reflected historical events and that all props and visuals stayed true to the time period.”

The Duffer brothers have regularly used product placement in their show – as have other Netflix shows, some paid, some unpaid – because the Duffers think it creates a better connection between character and consumer. (And many “nostalgia brands” maintain cult followings to this day.) New Coke was a no-brainer for them when it came time to capture the big moments of 1985.

“It was one of the first ideas in our Season 3 brainstorm,” said the Duffers. “It was the summer of ’85, and when you talk about pop culture moments, New Coke was a really big deal. It would have been more bizarre to not include it.”

The duo even created their own Coke commercial featuring the cast of Stranger Things and using the original music – and vibe – of the original ads from the 1980s. The new commercial is airing on YouTube and in select movie theatres around the country.

In addition to YouTube, Coke is promoting the collaboration on Twitter and with an online store selling New Coke and Stranger Things apparel. An “upside-down” soda machine selling New Coke will be appearing in select cities around the country and Stranger Things inspired packaging for regular Coke products will be hitting shelves this summer. Coke hopes the ongoing branding efforts will keep consumers interested in the partnership even after New Coke retreats back into history.

“Bringing back New Coke for the first time in 34 years seemed like the most organic way to bring this partnership to life,” said Stuart Kronauge, President of the Sparkling Business Unit for Coca-Cola North America. “Our commitment to innovation entails more than launching new drinks — it’s also about taking risks and trying bold new things in fun ways to bring delight and value to our fans. Partnering with Stranger Things undoubtedly delivers against this objective.”

In a first-of-its-kind partnership with Netflix, we’re bringing back New Coke as an innovative way to reach “Stranger Things” fans. https://t.co/m7MEfX6E4i pic.twitter.com/GKvRLZnpDP

Millennials have no particular feelings about New Coke, but their generation does have strong feelings about Stranger Things and avoiding obtrusive commercials. In 2017, 89% of Millennials used Netflix for most of their viewing, and a 2018 CNBC survey revealed that 60% of Americans across generations subscribe to a streaming service. This change in viewing habits, from traditional to over-the-top (OTT), has required brands to become more innovative to achieve the reach that was previously captured via TV. A careful integration, like the New Coke campaign in a show consumers are emotionally invested in, can reach those consumers who might not otherwise take the time to watch a Coke advertisement.

“This is uncharted territory for us,” said Geoff Cottrill, Senior Vice President of Strategic Marketing for Coca-Cola North America. “We want to look for ways to work with Netflix, but only in ways that don’t interrupt consumers, and don’t get in the way of the entertainment. If we can find ways to integrate authentically and add value to the experience, then we want to be a part of it.”

Netflix is very straightforward about never having traditional ads that disrupt viewing, but they are beta-testing “Extras,” a story feed on the Netflix app that promotes their own programming, and have begun looking at sponsorships with brands. Amazon has also introduced sponsorships to Prime Video. Hulu, which offers tiered services with and without commercials, has plans to launch pause ads this year. These pause ads are static advertisements that appear when viewers hit pause and disappear as soon as viewers re-engage. It’s an unobtrusive way to advertise, and a low-risk option for marquee brands dipping their toes into the streaming world.

For marketers looking to target the millions of consumers hooked on streaming, strategic partnerships and innovative campaigns that don’t rely on traditional mediums should be considered for any multichannel marketing initiatives.