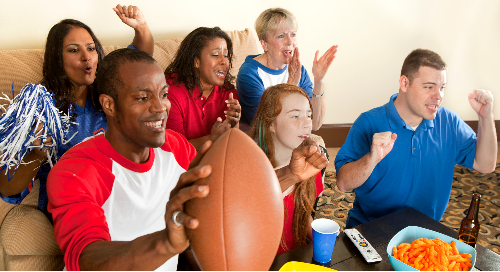 Super Bowl LII is right around the corner, and the much-anticipated pre-game buzz is focused on the potential for the Vikings to become the first team to compete in the big game at their home stadium. Team DMS loves talking sports. So while there are multiple factions within the company opinionating on which teams should go head to head at the big game, this blog post is all about helping marketers stand out even without a super-sized budget.

Despite declining NFL viewership and the estimated average $5 million price tag for a 30-second spot, commercial opportunities during the Super Bowl were almost sold out as of January 11, according to Dan Lovinger, Executive Vice President of Advertising Sales at NBC Sports Group.

Why is the Super Bowl still so influential for advertisers? We believe there are three primary reasons.

In general, the most innovative advertisers during the Super Bowl season generate the most buzz. What does that mean for your brand? Here are the takeaways of what many experts are expecting to be trendy this year.

According to the Edelman Earned Brand 2017 global survey, 57% of consumers believe their purchase decisions are impacted by a brand’s position on an issue. In fact, 65% of “belief-driven buyers” may skip purchases from a brand “when it stays silent on an issue they feel it has an obligation to address.”

With more social media platforms and publishers accepting 6-second ads, brands have been testing this snackable format that seems to appeal to millennials. According to Maud Deitch of Instagram, marketers “have to understand your subject matter, your medium, your production tools so much more intimately in order to make use of six seconds in an effective way. I think it’s one of the most important ad formats – if not the most important ad format – that we are going to see more of.”

Matching strategy and messaging to an audience and the current viewing situation is the objective of real-time creative, and many brands have seen tremendous success from this approach. Here are two prior Super Bowl examples:

Connecting a brand to a micro-moment: During the blackout of the 2013 Super Bowl, Oreo tweeted “you can still dunk in the dark.”
The result? Instantly boosted social engagement and followers.

Filming on the fly: To “zig while others are zagging,” according to their CMO Dean Evans, Hyundai decided to shoot, edit and produce their 90-second Super Bowl spot during the 2017 game.
The result? Hyundai received a slew of pre-game hype for their innovative plan.

Less than two months after Time declared “The Silence Breakers” to be their person of the year, empowering girls and women is part of our nation’s conversation. But inspiring women is nothing new for female-focused brands, as shown in the examples below.

#LikeAGirl. According to Amanda Hill, the Always brand director, their goal for this 2014 campaign was “to turn the phrase ‘like a girl’ from being an insult to being a real compliment and boost to self-confidence.” They were hoping to start a movement.

Goldieblox. In 2014, Goldieblox made history as the first small business to air a commercial during a Super Bowl after winning the $4 million media cost prize from Intuit. Their spot showed girls shunning the “princess way of life” as they embraced the STEM-focused toys that are designed to increase the number of female engineers (currently only 14% of all engineer worldwide, according to the Goldieblox website).

How can you guarantee success with a Super Bowl ad?

You can’t. But following marketing best practices can make victory much more likely. Make sure you know your audience, including what they need and want from your brand. Aim to connect with your audience positively, authentically and memorably. But make sure your brand is a central part of that memory.

How can you be part of the Super Bowl buzz if you can’t afford a seat at the big game?

Super Bowl season is much longer than the 60 minutes of game time. And the match is played out across all media channels. The four trends we addressed above are not exclusive to the Super Bowl, so have fun. Surprise and delight your audience. Connect with your consumers by being part of their lives. Know what they’re doing before, during and after the Super Bowl. Whether it’s via texting, voice search or any other channel, find a way to be part of your audience’s Super Bowl season. When you do that, you’ll have discovered your method of engagement.

Do you want help connecting with your audience during the pre- and post-Super Bowl period?

Team DMS is here to help. Fill out this form to have someone contact you directly.