The top 15 higher education programs, based on the share of voice for Q2 2016, comprised half of all inquiries and almost half of all conversions according to the Q2 2016 Higher Education Inquiry Generation Review. That means the ups and downs for these programs dramatically impact student recruitment performance across the United States.

We’ve outlined higher education inquiry volume and conversion data for each of the top 15 programs within this blog. Employment trends have also been included, as shifts in supply and demand can significantly impact student recruitment performance.

If these top higher education programs are on your school’s roster, this information can be used to benchmark your performance and plan for the future. If these programs are not on your roster, it might be time to consider the addition of a few. 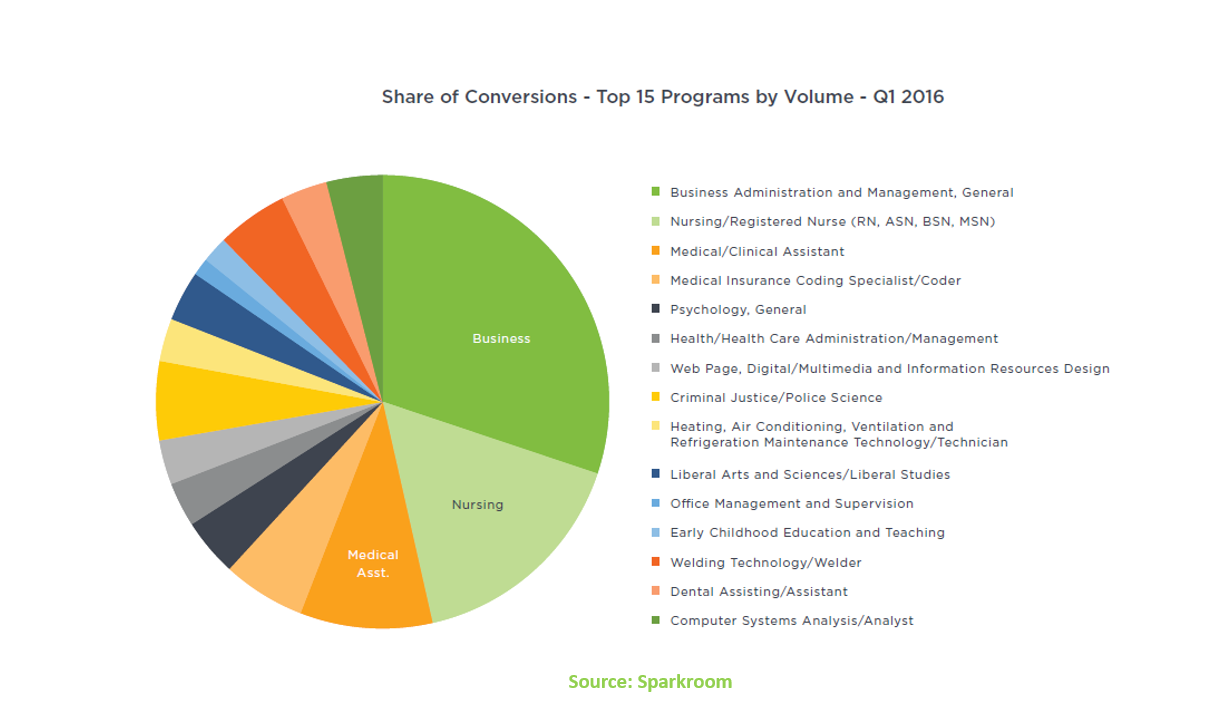 In early 2014, volume dropped dramatically for business programs. Despite fluctuations, the Business Administration and Management, General program has remained at the peak of the top programs list. The share of volume (SOV) for this program was steadily slipping until recently. But the past three quarters have been holding steady at an 11.6% SOV, so it appears we may have reached an end to the SOV erosion.

In early 2014, volume dropped dramatically for business programs. Despite fluctuations, the Business Administration and Management, General program has remained at the peak of the top programs list. The share of volume (SOV) for this program was steadily slipping until recently. But the past three quarters have been holding steady at an 11.6% SOV, so it appears we may have reached an end to the SOV erosion.

According to the Bureau of Labor Statistics (BLS), business and financial operations occupations are projected to grow at an average rate compared to all professions. But the median wage for business jobs is 82% higher than the median income across all occupations ($65,710 compared to $36,200), producing steady demand for business education.

In Q1 2016, the conversion rate for Business Administration and Management, General was 9.9%. This program produced 14.6% of all conversions during that quarter.

Inquiry volume has been up almost every quarter for Nursing/Registered Nurse programs. The greatest increase was during the first quarter of 2015 when the volume was up 110.7%. Volume changes have slowed dramatically since, and the quarter-over-quarter (QOQ) increase for Q2 2016 was only 5.8%.

Inquiry volume has been up almost every quarter for Nursing/Registered Nurse programs. The greatest increase was during the first quarter of 2015 when the volume was up 110.7%. Volume changes have slowed dramatically since, and the quarter-over-quarter (QOQ) increase for Q2 2016 was only 5.8%.

During the 2014 to 2024 period, employment of registered nurses is projected to grow at two times the pace of all occupations due to an aging population, increased preventive care emphasis and swelling chronic condition rates. This employment demand has been publicized for years, resulting in the buildout of nursing programs across the higher education industry. The decreased conversion rate was likely due to this increased competition and the quantity of available choices for prospective nursing students.

Volume has been up and down over the past ten quarters for Medical/Clinical Assistant programs, but Q2 2016 was its highest point for the period. Volume and SOV for Q2 2016 are both up 42.4% since Q1 2014.

The Q1 2016 conversion rate was 6.5%, which was down 34.5% YOY and flat to Q4 2015. While employment of nursing assistants and orderlies is expected to grow at a pace even faster registered nurses, the salaries for these positions are low ― averaging $25,710 in 2015. This meager pay is a contributing factor to the below-average conversion rates for these programs.

The volume and SOV for Medical Insurance Coding Specialist/Coder programs are tied both to employment projects and job requirements. The “health information technicians” job category is expected to grow at a rate of 15% between 2014 and 2024, according to the BLS. The median salary for medical insurance coders is $37,110, which is slightly higher than the average across all occupations due in part to the certificate program requirement for most medical coding jobs.

In the fall of 2015, Medicare ICD-10 coding guidelines were introduced. Inquiry volume for medical coding programs went up 12.3% in the next quarter (Q1 2016). The grace period for ICD-10 ended on October 1 of this year, so we believe it is very likely that there was another volume spike during Q3 as medical coding professionals made last-minute preparations for this change. (The Q3 2016 Higher Education Inquiry Generation Review, published in December, will include data related to this topic.)

Volume for Psychology, General programs climbed steadily throughout all of 2014 and the first three quarters of 2015. Volume slipped slightly the next two quarters but jumped again in Q2 2016. The Q1 2016 conversion rate was 5.2%, typical for this program which has a conversion rate that hovers in the 5% region.

Employment is expected to climb 17% from 2014 to 2024 for medical and health service managers, according to the BLS. This industry has a high median salary of $94,500, but master’s degrees are typically required for the best jobs.

Volume for web page, digital/multimedia and information resources design programs was up almost 53% YOY, and the conversion rate was up 53.8% QOQ.

Demand for web developers is skyrocketing. According to the BLS, 27% growth is projected for this occupation from 2014 to 2024. Only limited education (typically an associate’s degree or a focused certificate program) is needed to enter the web development field, and the $64,970 median pay is expected to climb because employer demand outweighs the supply of qualified employees.

To meet the anticipated demand for education, there has been an influx of coding bootcamps, which was documented by Wired magazine as early as 2014. More education demand and the buildout of more programs will undoubtedly continue now that the U.S. Department of Education is providing federal aid for coding bootcamps via the Educational Quality through Innovation Partnerships (EQUIP) program.

HVAC programs saw YOY increases and QOQ slips in both inquiry volume and conversion rates. The BLS anticipates HVAC jobs will grow by 14% between 2014 and 2024. Although the median salary is only $45,110, the increasing complexity of HVAC systems is resulting in strong demand for HVAC education.

Liberal studies programs are a frequent topic of discussion for conversations that address the ROI of higher education. Many see the value of diverse education that provides the foundation for problem-solving skills. But others believe liberal studies programs are not focused enough on securing the skills of a particular profession. As this debate continues, the fluctuation of inquiry volume and conversion rates will go on.

The BLS predicts the employment of administrative services managers will grow by 8% from 2014 to 2024. With an average salary of $86,110, these are desirable jobs.

Conversion rates were down a sharp 27.8% for the quarter but up slightly YOY. The BLS projects strong employment growth within the dental assisting field ― up 18% from 2014 to 2024. But these are not high-paying jobs. The median salary, as of 2015, was only $35,980. Education demand for dental assisting varies state by state. Some states require degrees and exams. Other states have no formal education requirements.

Employment of computer systems analysts is expected to grow dramatically (up 21% from 2014 to 2024 according to the BLS) due to growth in areas including cloud computing, cybersecurity and mobile networks. Not surprisingly, this program saw both QOQ and YOY growth in inquiry volume and conversion rates. And in Q1 2016, the conversion rate was 11.1% ― the highest of all the top 15 programs. 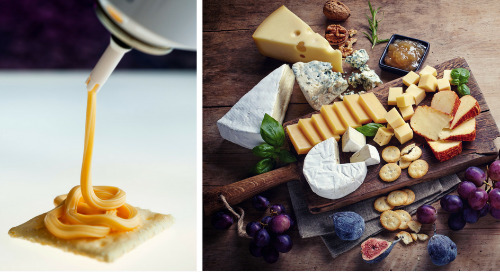 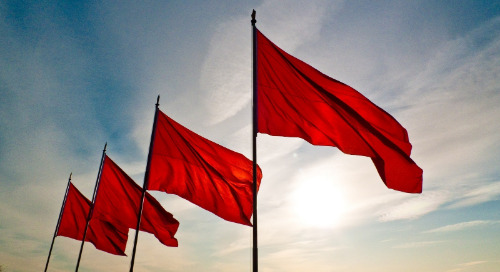 It’s easy to get complacent with your paid search campaigns, but these 15 red flags are a reminder that it’...