As another Father’s Day quickly approaches, marketers are gearing up to showcase their newest campaigns and capitalize on the $17 billion expected to be spent by consumers. However, many brands are making a conscious effort to revamp the outdated “hands-off” dad stereotype within their Father’s Day ads, and are instead highlighting more realistic, positive images that resonate with the modern-day dad. Additionally, brands have taken note of consumers’ shifting spending habits, as many shoppers are still feeling the effects of the coronavirus pandemic. 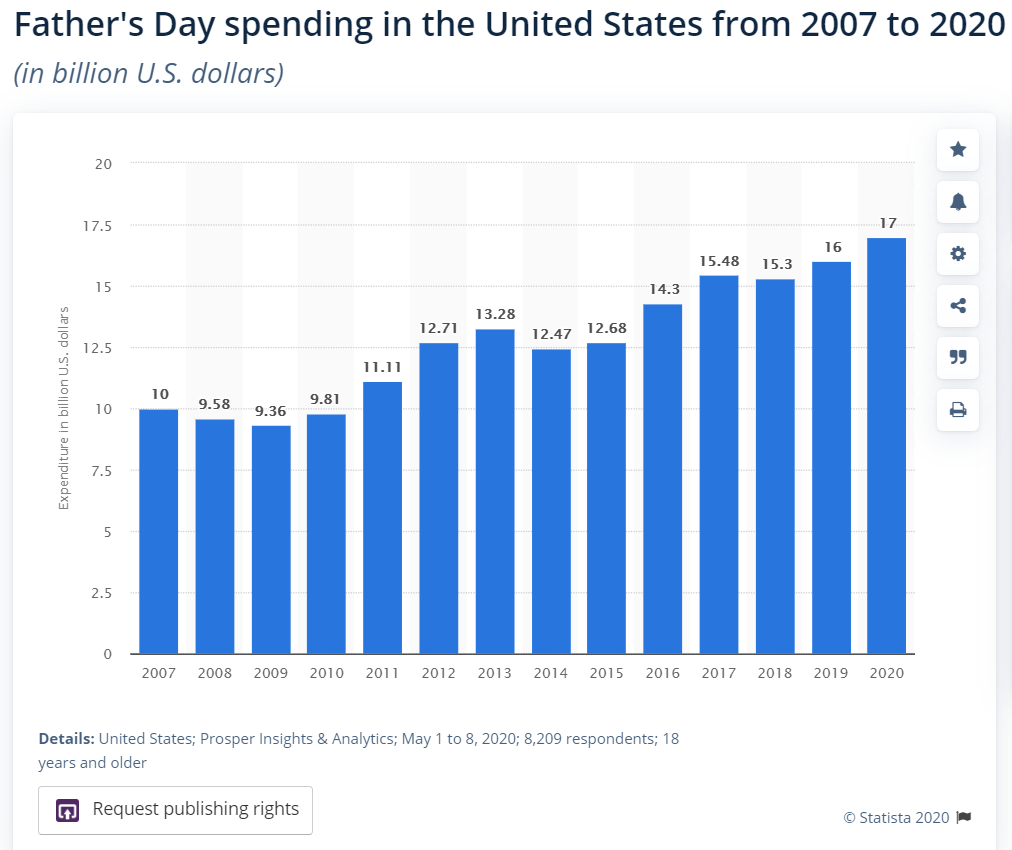 While the effects of the pandemic will inevitably still halt many families from enjoying Father’s Day away from the home, 75% of consumers stated they plan to celebrate Father's Day, with 58% planning to celebrate virtually, according to the National Retail Federation’s (NRF) NRF’s Annual Father’s Day Survey. Many shoppers have even credited the pandemic as more of a reason to celebrate Father’s Day this year, sharing plans to splurge on dad more than usual or purchase a unique gift — particularly consumers under 35, NRF noted. NRF’s survey found that the average consumer plans to spend $149 on Father’s Day gifts — a $10 increase from what consumers spent in 2019. 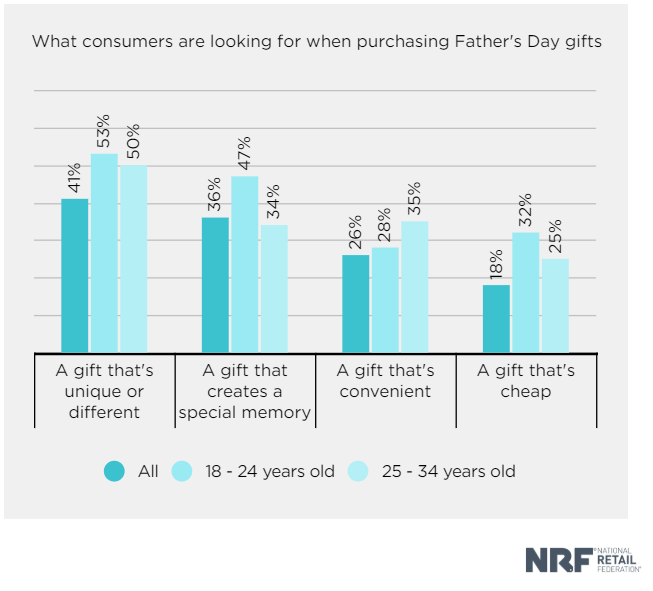 “A lot of the everyday activities that consumers may have taken for granted, like a family cookout or simply being able to give their dads a hug, were put on pause with COVID-19,” said Phil Rist, Prosper Insights Executive Vice President of Strategy. “As a result, many people want to make this Father's Day stand out.”

According to NRF, this year’s Father’s Day purchases, similar to Mother’s Day, are reflective of shoppers’ social distancing lifestyles and newfound interests while stuck at home, noting, “Consumers want to make sure dads have the right gear as they launch their own HGTV-inspired projects. The percentage planning to gift tools, appliances or home improvement items grew significantly this year.”

Similarly, Google trends reported a spike in searches for at-home haircuts and men’s hair clippers, and “the number of consumers planning to gift dad a personal care item for Father's Day is up 21% year over year.” 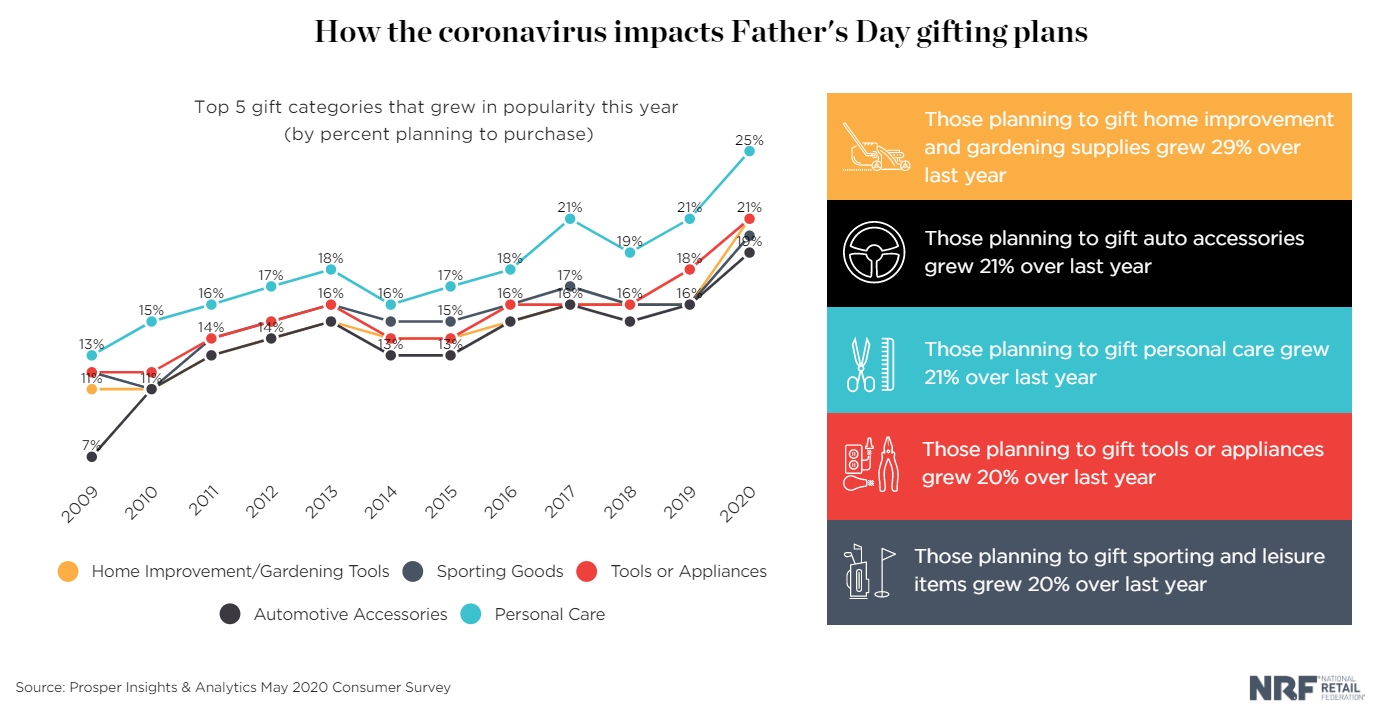 While the importance of an accurate depiction of “dad” in Father’s Day campaigns is more prominent now than ever, many brands proved their ability to keep up with growing consumer trends and expectations in recent years. Creating ads that spotlight the modern-day “dad,” three of the biggest brands launched Father’s Day campaigns throughout the past two years that shifted away from the outdated father-figure role, and reflects this year's consumer values in a major way.

Honing in on today’s depiction of what it means to be a dad, Unilever-owned brand Dove created the #DearFutureDads Father’s Day campaign in 2018, spotlighting dads sharing their advice with new fathers on “the importance of bonding with their children in early childhood.”

Dove Men+Care has been a trailblazer in shifting the portrayal of fatherhood in advertising, even showcasing their support for dads taking paternity leave with the creation of their Pledge for Paternity Leave and Paternity Leave Fund. According to Mintel research, Millennial dads in particular are “incredibly invested in their role as parents.” Mintel notes that brands who successfully create ads depicting dads as caretakers are “well aligned with younger consumers’ values.”

Budweiser’s 2019 Father’s Day campaign took an untraditional approach to honoring dads, shining a light on all the stepfathers of the world who have made an impact in their stepchildren’s lives. “On a day when the world celebrates fathers, Budweiser wants to shine an unexpected light on fatherhood,” said Monica Rustgi, Budweiser Vice President of Marketing. “That’s why this Father’s Day, Budweiser is toasting stepfathers who love their stepchildren like their own.”

The short film created as part of the Budweiser Father’s Day campaign documents three stepfathers alongside their stepchildren, sharing childhood stories that represent how each stepdad rose to the occasion of filling the “dad” role for his stepchildren. The campaign received significant praise on social media, and the beer brand encouraged viewers to share their own personal stories of their stepfathers. For every story received, Busweiser vowed to donate $1 (up to $10,000 total) to The Stepfamily Foundation, a nonprofit organization helping blended families.

With almost 50% of working dads admitting they don’t spend enough quality time with their children, the #DanceLikeADad Father’s Day campaign from the U.S. Department of Health and Human Services’ Administration for Children and Families (ACF) and the National Responsible Fatherhood Clearinghouse aimed to prove it only takes a few minutes to create a meaningful memory with your kids. Through a series of light-hearted videos, the 2019 #DanceLikeADad campaign spotlights dads showing off their best dance moves – from beatboxing to the classic robot – in front of their kids, resulting in a fun, heartwarming interaction.

Part of the larger “Responsible Fatherhood” campaign created in 2006, the #DanceLikeADad ads were created to highlight the positive and long-lasting impact that comes from dads being involved in their kid’s lives. According to the campaign creators, “children who feel close to their fathers exhibit better cognitive and social functioning, including increased self-control, self-esteem and empathy.”

While holiday’s like Father’s Day often bring out lighthearted and comedic ads, it’s vital for marketers to stay on top of consumer’s growing expectations of brand messaging. Taking both the pandemic and the modern-day depiction of “dad” into consideration, brands should adjust their Father’s Day campaigns to highlight a convenient and seamless buying process, the style of this year’s coronavirus-impacted celebrations and an accurate image of the modern role dads play in the home. In doing so, brands can successfully resonate with today’s consumer and open the door to long-term loyalty.