Kentucky Fried Chicken, or KFC for short, has been known for its wild marketing campaigns that often shock consumers. Here at DMS, we’ve written about their buzz-worthy campaigns time and time again. It’s no surprise KFC is now crowdsourcing for their unique KFC-themed inventions.

With the KFC Innovations Lab, a place for all inventions to come alive, the fried chicken brand has blueprinted five new ideas, all inspired by Colonel Sanders himself. KFC is fundraising from fans in hopes to create these new inventions.

“With the launch of KFC Innovations Lab,” said Steve Kelly, KFC U.S. Director of Media and Digital Marketing, “non-Colonels can now be part of that [fundraising] process and support important projects such as a hot tub that looks like a bucket of fried chicken, so we can keep focusing on making actual buckets of fried chicken.”

The five KFC crowdsourced campaigns are listed on IndieGogo, where fans can score some branded swag when they contribute to the inventions.

KFC Focuses On The Value Of The Buzz, Not The Money

On IndieGogo, the total donation goals for KFC inventions vary but are large amounts like $195,000 and $2.2 million. If the goals aren’t met, all donators get their money back.

While the KFC crowdsourcing initiative has been live since March 6, the IndieGogo campaigns have few donations. The Little Colonel Locator has been the most successful, reaching nearly $1,300 in donations, while the Smart Cane Remote has been the least successful with $110.

KFC is once again generating buzz. The KFC Innovations Lab has been covered by large media sources like PR Newswire, MSN, Forbes, Delish and Food & Wine. Even USA TODAY Money is tweeting about the fried chicken bucket hot tub.

Using their Instagram account, KFC promoted their inventions to their followers to encourage buzz. Their chicken bucket hot tub garnered more than 11,000 likes and a portfolio of comments. 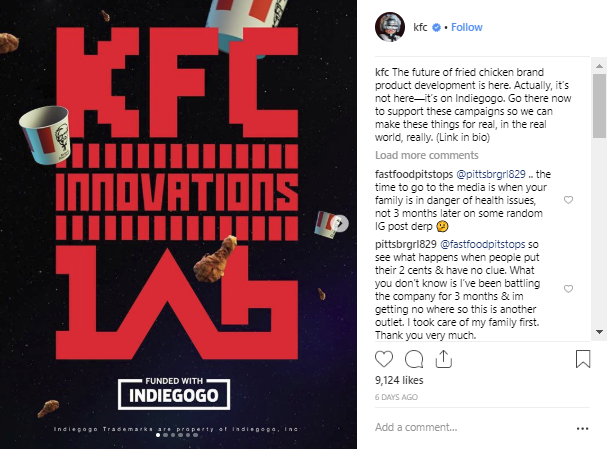 From celebrity portrayals of the Colonel to cardboard picnic tables, KFC hardly ever disappoints with creative marketing campaigns, leaving us to wonder if another brand will ever rival KFC’s marketing.