First it was high-waisted jeans and scrunchies, and then it was… everything. More and more fashion brands are tapping into those nineties vibes to tweak the nostalgic feels of Millennials and Gen X, but mainly to capture the attention of younger consumers — the ones who wear the scrunchies. (Generation Z, 1997-2012, represents more than $150 billion in spending power in the U.S.) From sneakers to sportswear, retro-fashion campaigns include immersive and hands-on brand activations, influencer-generated video content and strategic partnerships.

Sneaker companies are particularly good at leveraging interest in the nineties for both the design and marketing of their shoes. New Balance partnered with Foot Locker to create a “Rewind to the 90s” pop-up that was full of nineties call backs and kicked off with a special appearance by Steve Urkel himself. Guests were invited to walk through a nineties-themed house, indulge in a Koosh ball pit, visit a mock Blockbuster and shop for a variety of New Balance products including the nineties-reminiscent X-90 Recon sneaker.

“New Balance’s newest model, the X-90, is a great opportunity for Foot Locker to nostalgically immerse our L.A. consumers into the decade,” said Patrick Walsh, VP of Marketing for Foot Locker North America. “The pop-up is not only a store but an experiential space, reminiscent of 90s youth culture.”

Reebok also capitalized on the nineties trend with the re-release of the Aztrek, the brand’s off-road sneaker from 1993. Reebok partnered with a variety of influencers to make a video series for YouTube that focused on nineties inspo, fashion collaborations and what the nineties meant to the influencers — with heavy doses of the Aztrek and Reebok sportswear featured in the series. Of the influencers, fashion website L’Officiel, says, “Fitting the mix of nostalgia and innovation, the campaign's six stars are creatives and tastemakers whose formative years fell at the end of the millennium,” adding, “All have individualistic, entrepreneurial spirits, which they connect to the creative explosion of two decades ago, as well as the sneaker's journey from performance to fashion.” The mix of digital and retro, new tastemakers and vintage fashion is an effective way to bridge the generations and re-introduce new trends.

For Fila And Champion, “Never Change” Was A Winning Formula 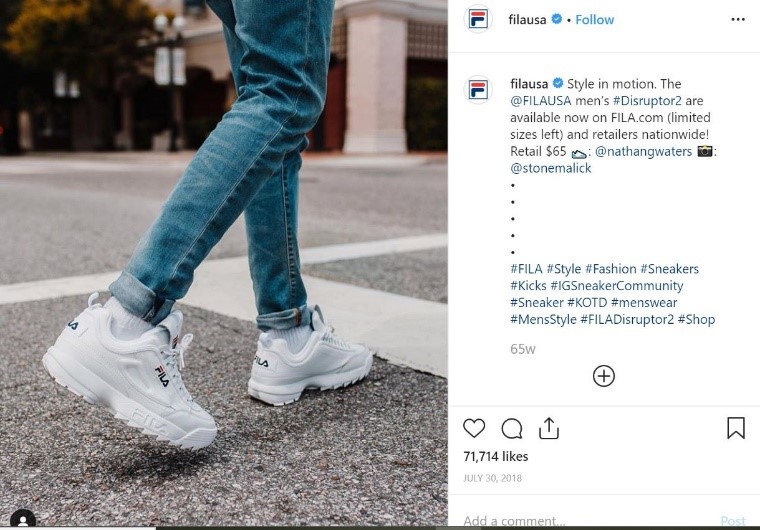 The rise of streetwear has been a major component of much of the nineties fashion resurgence. According to CNBC, “Streetwear is now valued upwards of $100 billion, and almost 71% of Millennials and 74% of Gen Z consumers wear the style some or all the time.”

Fila and Champion have benefitted from the streetwear trend, and the spike in the popularity of their products only required minimal tweaking of existing styles to cause a huge surge in excitement and sales. The two iconic brands also partnered with other streetwear companies to add increased visibility. “Fila’s behemoth platform sneakers and Champion’s reverse weave sweatshirts are instantly recognizable, backed by social media influencers and throwback to nineties trends,” said Kayla Marci, Market Analyst at Edited, a retail analytics firm. Fila’s sales have increased 205% since 2016, and Champion revenue (owned by Hanesbrands) rose 36% in 2018, with 29% growth expected by year end. Few Gen Xers would say they are nostalgic for “ugly sneakers” from 1993, but Gen Z clearly loves them.

The Excitement About Retro Fashion Is Good For Brands

“There has to be something that is forcing teens to get out there and shop, and I think there hasn't been something for such a long time. So that's why I think this [nineties trend] is a positive shift,” said Gabriella Santaniello from A-Line Partners, an independent retail research firm. According to U.S. News & World Report, at the start of the 2018 school year, many retailers were hoping the nineties trend would be the hook that finicky younger consumers needed to open their wallets. Brands like Urban Outfitters that were banking on the nineties trend saw upticks in sales through 2019, and though in-store traffic continues to wax and wane, online sales are still strong. The flexibility that Gen Z typically displays when shopping, a mix of showrooming, mobile and in-store buying, presents unique opportunities for digital marketers to capitalize on the nineties trend and reach Gen Z consumers.

Are You Looking For Innovative Ways To Connect With Younger Audiences?