Nearly 100 million viewers tuned in to the Super Bowl in 2019. Every year, it is the most watched broadcast, and many people enjoy the commercials as much as the NFL’s big game, with hosting networks making more than $480 million in revenue from the coveted ad spots.

Super Bowl advertising can be a perfect opportunity for brands to drop one-off spots that make all the “best of” lists the next day. But, many brands choose to create Super Bowl spots that embrace their brands’ larger messaging, offering opportunities for multichannel promotions and growth beyond just the game. This year’s Super Bowl LIV advertisers and sponsors are lined up and, most likely, ready to go, although only a few advertisers have revealed details about their ad campaigns.

Hosted in Miami this year, the city has been gearing up for the big day. The Roman numerals of this year’s game spell LIV, which Miami is deploying for their #LIVEITMIAMI hashtag promoting upcoming Super Bowl LIV events in the Florida city. Verizon is sponsoring Miami’s Super Bowl Live events leading up to the big game, while the Super Bowl Experience, an interactive theme park, is sponsored by Lowe’s, official home improvement retail sponsor of the NFL. The Super Bowl Experience is being promoted with a hashtag campaign (#SB54) and offers a variety of digital experiences for fans.

Bud Light is returning as the official beer sponsor of the NFL and topline sponsor of the Bud Light Super Bowl Music Fest. Not surprisingly, Anheuser-Busch, Bud Light’s parent company, will also deploy multiple commercials during the game with AdAge predicting the brewer may use Super Bowl LIV to kick off their new line of Bud Light seltzers.

Facebook continues their efforts to rally after a difficult year with their first spot in the Super Bowl. The 60-second ad features Sylvester Stallone and Chris Rock and serves as a part of the social media monolith’s “More Together” campaign promoting Facebook groups. Facebook’s foray into Super Bowl advertising could be another indicator that Facebook, which notoriously has not advertised, understands the need to reach out to their audience and work to rebuild trust. 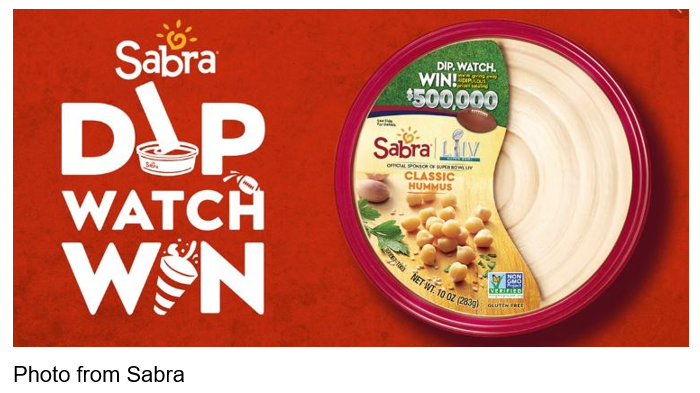 Dip and football go together like hummus and pita, and Sabra is here for it. The 2019 Super Bowl is Sabra’s first time at the big game, and the dip company has created an interactive sweepstakes to encourage Sabra customers to tune into their advertising during the big game. Sabra is giving away five $100K prizes and 100 tubs of hummus to fans who participate in their Super Bowl sweepstakes by either scanning QR codes and registering for their game piece or by going to Sabra’s freeplay website. Participants will find out if they have the winning game pieces by watching the big game on February 2nd.

TurboTax is making their seventh appearance at the Super Bowl this year, with a spot in support of their “All People Are Tax People” campaign, aimed at making tax preparation seem doable to everyday people. “All People Are Tax People” kicked off in early January. According to Marketing Dive, the new advertising push from TurboTax “features a 60-second anthem video and will span broadcast, digital and social platforms,” culminating with a 45-second Super Bowl spot.

Looking For New Opportunities To Boost Engagement With Targeted Audiences?