The music industry has seen a giant surge in the first half of 2019. Streaming and subscription services now make up 80% of the entire industry’s revenue, with the number of paid subscriptions exceeding 60 million for the first time ever. 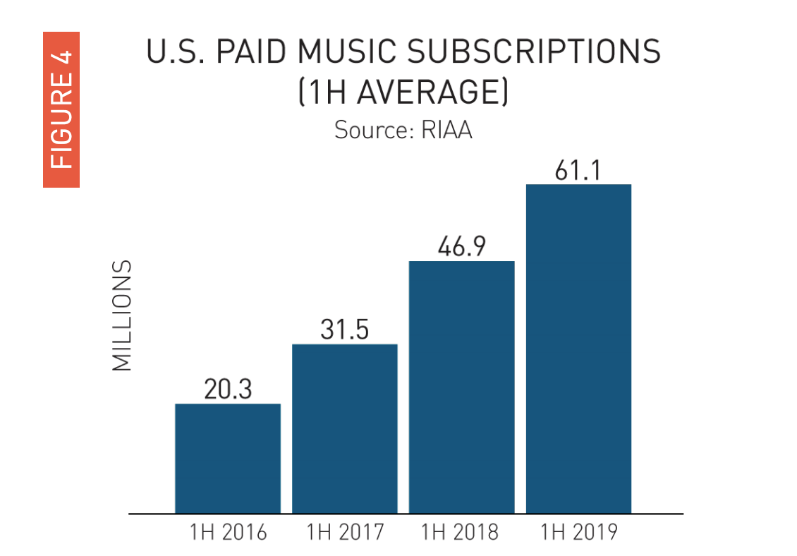 The latest report from the Recording Industry Association of America (RIAA) – a trade group for recorded-music companies – broke down the recent jump in music industry revenue in the first half of 2019, crediting the increase to the continued rapid growth in the number of paid subscriptions:

The RIAA noted increased earnings in streaming music subscription revenue were partially offset by a drop in digital sales. In the first half of 2019, download revenues plummeted to $462 million, compared to $561 million in 2018 and $765 million in 2017.

The Music Industry Remains On An Upward Path

“Thanks to that breakneck growth, plus continued modest drops in digital downloads and new physical sales, streaming now generates 80% of music business revenues and has fundamentally reshaped how fans find, share and listen to the songs and artists they love,” said RIAA Chairman and CEO Mitch Glazier.

The music industry is no doubt earning more than usual thanks to the modern-day streaming subscription services like Spotify, Apple Music and Amazon, all of which combine to be the engine driving today’s music business.

Where Does The Future Of The Music Industry Stand? 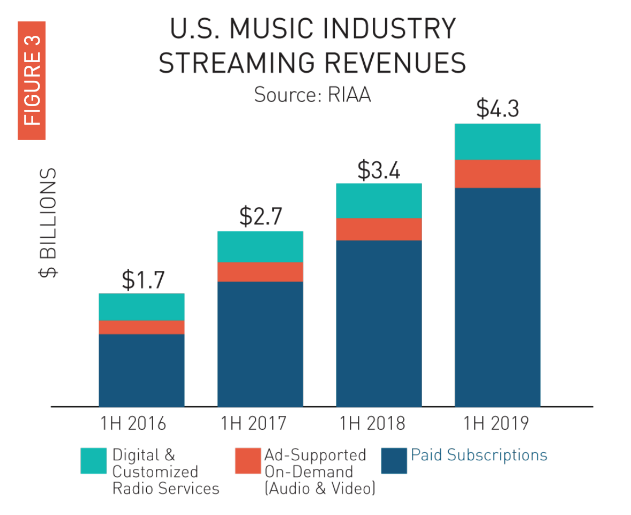 With sales of digital downloads from stores like iTunes dropping and more big-name artists embracing streaming subscription platforms like Spotify, all signs point to continued growth for the music subscription industry. According to Futuresource Consulting, the number of global paid music streaming subscribers could reach 350 million by 2022.

The increased development of diverse music streaming subscription services throughout the industry is influencing brands to provide consumers with additional features, like easy accessibility on multiple platforms, high audio quality and auto playlist personalization. These developments, along with the positive growth trends, are expected to make a significant impact on the overall market growth.