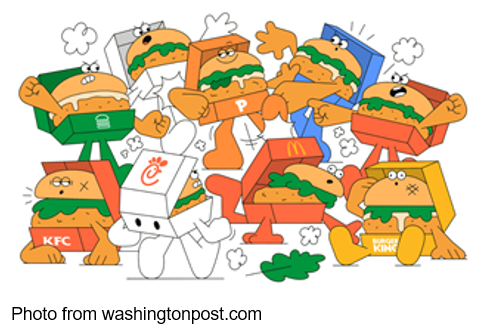 2019 was, what many have called, the year of the chicken wars, as the pop-culture status of the chicken sandwich reached new heights. Now, as we round out the first half of 2020, brands like KFC, Popeyes and Wendy’s are hoping to reignite the chicken wars phenomenon and keep the momentum going through fresh social media campaigns, evolved digital marketing strategies and revamped brand images.

Despite being the second largest chicken chain by sales, the largest chicken chain by unit count and the chicken chain with the deepest legacy, KFC has yet to get in on the chicken wars challenge — until now, that is. The fast-food brand recently launched its “perfectly fried chicken sandwich,” a larger, upgraded sandwich made to compete in the coveted chicken wars, and, ideally, create the same excitement that catapulted fellow chains like Popeyes and Chick-fil-A into chicken sandwich stardom just last year. 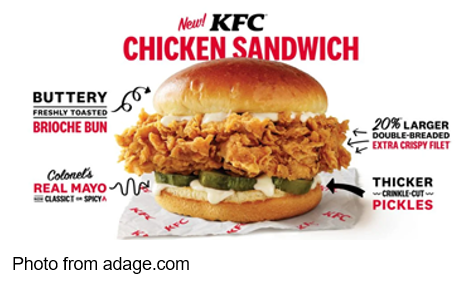 “We realized that [the Crispy Colonel] wasn’t the one to beat in the market, and we just weren’t O.K. with that,” said Andrea Zahumensky, KFC CMO. Zahumensky shared the chain has been working on the sandwich since mid-2019 and kept a close eye on the fast-food industry throughout the viral chicken wars of last year.

Due to the current health crisis, KFC will gather feedback on their newest release virtually, including obtaining videos from diners’ cars and taking part in virtual chats with restaurant managers. KFC also plans to deliver first tastes of the sandwich to those on the front lines during the pandemic.

KFC could use the boost that a new sandwich might bring, as the brand had the slowest sales growth among the major U.S. chicken-focused chains last year. This latest offering puts KFC in a contest with rivals Popeyes, which reported explosive growth since unveiling its own chicken sandwich last summer, and Chick-fil-A, whose original chicken sandwich was the trailblazer which many chains have emulated.

Since starting the #ChickenSandwichWars last August with the launch of its chicken sandwich, Popeyes has been gaining popularity and quietly updating its brand image. According to Restaurant Business, at the end of 2019, Popeyes generated more than $3.8 billion and jumped to the 19th largest domestic chain by sales. The increase in revenue carried into Q1 2020, with Popeyes sales up 26% as of May 1, largely due to the chicken sandwich effect. 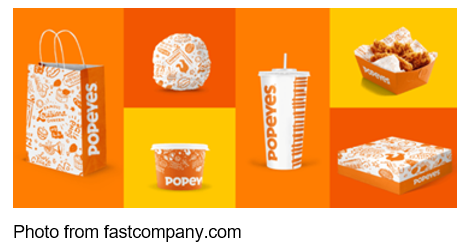 “Popeyes’ success last year was unlike anything any of us have seen in our careers, but its resilience in the face of COVID-19 with dining rooms closed across the country has been equally remarkable,” said Restaurant Brands International’s (RBI) CEO, Jose Cil.

In an effort to continue the momentum and heighten the brand’s image with consumers, Popeyes has unveiled a new brand identity. Upgrades include a new, contemporary logo and new packaging, employee uniforms and merchandise. Popeyes has also revamped the interior and exterior designs of its restaurants and is expanding internationally, opening a restaurant in Shanghai. The new look and global expansion aims to elevate the brand, capitalize on its newfound popularity and continue its spike in revenue.

Popeyes’ Q1 success is impressive, especially considering the current state of the restaurant industry, which is struggling amid pandemic-related closures — a testament to the power of Popeyes’ chicken sandwich. “Comparable delivery sales are up in the triple digits year over year, and we continue to see delivery as a huge opportunity to reach new guests,” Cil added.

Wendy’s latest creation proves the chicken sandwich competition that dominated the 2019 fast-food narrative has trickled into the breakfast space. Investing $20 million on their latest launch – utilizing social media and TV advertisements – Wendy’s has introduced their Honey Butter Chicken Biscuit as part of their new breakfast menu. “The breakfast day part is a sizable market,” said George Belch, San Diego State University Marketing Professor. “There are potentially a lot of younger people who are not an eat-at-home crowd. They are used to going out to eat. Wendy’s says this could add 10% to their revenue.”

Competition for breakfast has heated up in fast food as of late, with major players like Taco Bell, Burger King and White Castle all offering their own breakfast options. David Henkes, Advisory Group Senior Principal at Technomic (a market research firm), said total breakfast sales in fast food, quick-service restaurants (QSR) and full-service restaurants were $109 billion in 2018, up from $96.3 billion in 2015. “We are forecasting it will continue to outperform the industry in general,” Henkes stated, “with a lot of opportunity to convert consumers from their at-home activity. Breakfast is still extremely underpenetrated, and there’s still a lot of white space.” 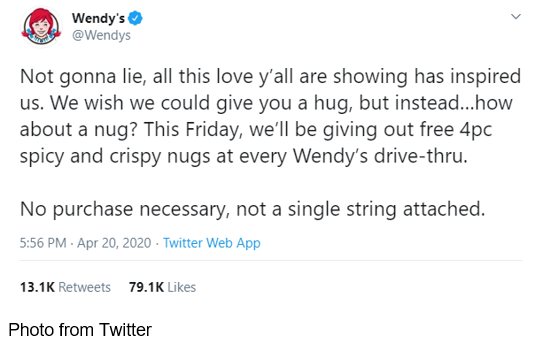 As part of the crispy chicken biscuit rollout, Wendy’s put “competitors on notice” via Twitter, letting fellow fast-food chains know that Wendy’s was entering the battle. “We believe this product easily goes head to head versus the competition and is far greater in terms of the overall flavor profile,” Wendy’s CMO Carl Loredosaid.

The new chicken for breakfast option from Wendy’s comes on the heels of the chain’s recent efforts to broaden brand awareness through multiple chicken offerings. The brand recently promoted a slew of fun in-app deals to their loyal fans, even giving out a free spicy chicken sandwich for the month of May. Wendy’s also tried to drum up business by launching its “GroupNug” offering, giving out free chicken nuggets at several of its drive-thrus.

While the #ChickenSandwichWars campaign may have hit its peak in 2019, brands like KFC, Popeyes and Wendy’s have shown the potential that comes from refreshing and evolving successful campaigns. These fast-food chains are effectively leveraging their digital presences and playful social media tactics to reach consumers and increase brand awareness in preparation for restaurants reopening.