If you’re “Mr. Guy Who Used To Love Those Real Men Of Genius Bud Light Radio Spots” that ran from 1998 to 2007, then you’re in for a treat, because the commercials are back. The original campaign, called Real Men Of Genius, has been re-introduced by Bud Light as Internet Heroes of Genius. The new spots are airing on a mix of digital channels that align with the ad content, which pokes fun at the unique careers of digital “geniuses.”

The original commercials generally teased the stereotypically male tropes, like Mr. Really Bad Toupee Wearer, while the new campaign focuses on careers or behaviors more specific to the digital age. Among them, Corporate Social Media Manager, Video Streaming Login Sharer and Snapchat Lens Creator. In the spots, a voiceover offers encouragement to these genius men for their deft skill at writing social posts about almond milk or the bad luck of having shared all their streaming passwords with an ex.  The commercials are funny and relatable while the campaign is highly targeted across media channels.

The Bud Light Dilly Dilly campaigns, which relaunched during the Super Bowl prompting a response from competitor Miller Lite, will continue to be central to Bud Light’s marketing strategy.

“The core of Bud Light is always fun and connecting with young people, and we think this is a great way to do it,” said Conor Mason, Director of Digital Marketing for Anheuser-Busch, says about the addition of Internet Heroes of Genius to the Bud Light advertising strategy. 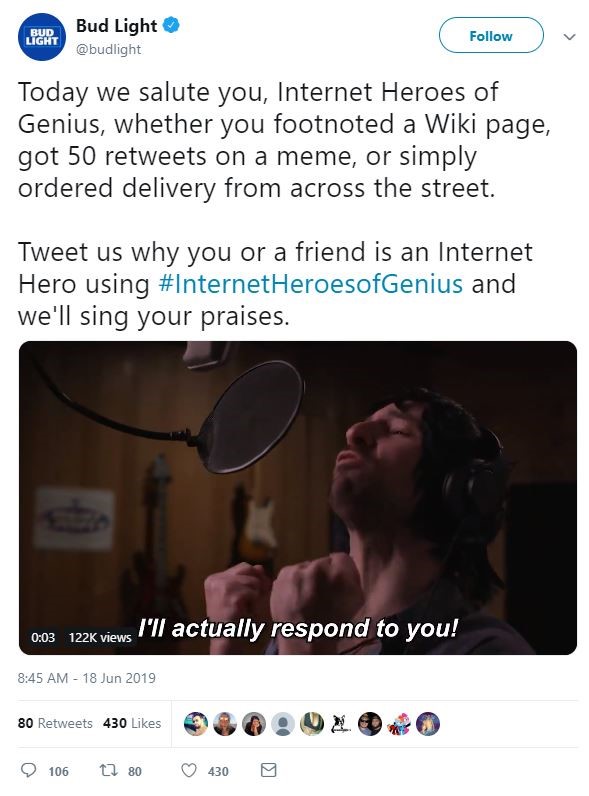 The theme of the individual commercials aligns with the platforms on which they are airing. “You can see how Snapchat Lens Creator fits itself perfectly for Snapchat. Person Who Sorts By New is very specific to Reddit. Video Streaming Login Sharer will be running on Hulu and some other video streaming platforms,” said Mason. And true to the original radio roots of the Real Men of Genius campaign, the new campaign’s spots are airing on digital radio throughout the summer.

Bud Light also launched a Twitter component to the campaign, asking users to share how they or friends are #internetheroesofgenius, and Bud Light already responded to several of the Tweets with funny one-liners similar to the Internet Heroes of Genius ads.