Superstar Ariana Grande’s “Sweetener” tour is bringing her fans the best bops and a chance to register to vote ahead of the 2020 presidential election. In March, Grande took to Instagram to announce her partnership with non-partisan voter registration group HeadCount. Concert goers can register to vote at tour stops (and get a #thankunextgen sticker) or text “Ariana” to receive updates from HeadCount and information on how to register to vote. 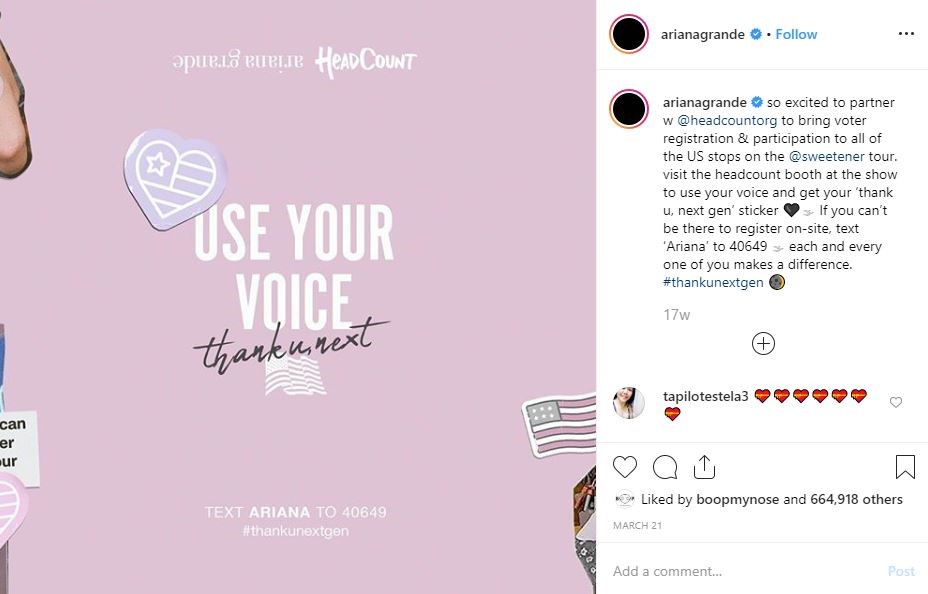 Musicians And Voter Registration Drives Have A Long History Of Success

Getting out the vote has long been a passion project of celebrities and artists, and musicians are no different. HeadCount launched in 2004 and has registered 600,000 voters in the last 15 years, working with artists including Jay Z, The Dave Matthews Band, Wilco and Chance The Rapper. “The musicians from all genres have often chosen to use their platforms to express their political beliefs or organize their fans around causes that are important to them,” said Laura Sohn, Bonnaroo’s Director of Sustainability who manages social impact projects for the popular music festival. “People just seem so much more engaged this year.” HeadCount registered 1,390 people at this year’s Bonnaroo music festival, more people than at any other single HeadCount event.

Voter registrations are up with other organizations as well. “Rock the Vote has processed almost 60% more registrations this year than it did by this time in 2015, which holds the record for registrations for a year leading up to a presidential election,” said Carolyn DeWitt, President and Executive Director of Rock the Vote.

Outreach To Fans Via Social Media Can Boost Voter Rolls

Although Grande’s Sweetener tour is the most successful partnership for HeadCount since Jack Johnson’s tour in 2008, sometimes a celebrity only needs to offer personal encouragement to their fans to generate a surge in voter registrations. Prior to the 2018 election, Taylor Swift posted on Instagram reminding her fans to take advantage of early voting, particularly in her home state of Tennessee. Vote.org was linked in Swift’s Instagram bio and the organization saw a significant uptick in voter registrations after the Instagram post when compared to the same time period in prior elections.

#Thankyounextgen May Have A Big Impact On The 2020 Election

Ariana Grande’s core audience, primarily Gen Z and Millennials, will be huge players in the upcoming election — as they were in the midterms, casting more than a quarter of the total votes. In the upcoming election, Gen Z will account for more than 10% of the electorate, surpassing the Silent Generation for the first time according to a new study by Pew Research. (Approximately three-quarters of HeadCount’s newly registered voters are 18-25 years old.)

Of course, registering to vote is different than actually voting. Kamari Guthrie, Director of Communications at Vote.org, says it’s important for organizations to continue engaging voters after events. Once an activation with a musician or celebrity ends, targeted SMS and email and social media campaigns can effectively keep newly registered voters in the loop — reminding them why they signed-up in the first place.