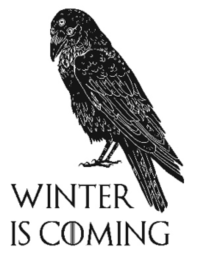 Congratulations Game of Thrones (GoT) fans, you made it! It’s been nearly 600 days since you last visited Westeros, and now the wait is over. Winter is finally here. On Sunday, April 14th GoT is back with its eighth and final season premiere.

Since GoT first debuted in 2011 and become an instant juggernaut, the show has enjoyed a number of brand partnerships and corporate integrations. HBO’s (final) #forthethrone campaign is no exception. Here’s a look at a few of the advertising and branding campaigns aimed at GoT fandom.

Urban Decay Appeals To Women Who Love Game Of Thrones 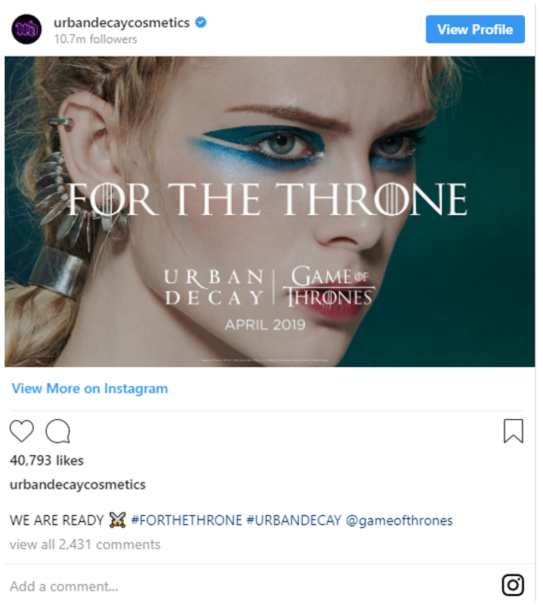 Although rumors of a GoT makeup line have persisted for years, Urban Decay ultimately landed the collaboration and will be releasing their collection at a date to be determined. (Urban Decay previously worked with HBO on the show Vinyl, so their inside track on the makeup line could be courtesy of that prior partnership.)

The Urban Decay GoT line features metallic eye shadows inspired by the women of Westeros, a Mother of Dragons highlight palette and a cheek and lip tint that looks a lot like a vial of dragon’s blood and several other GoT-ish makeup items. Teased heavily on Instagram and Twitter, the GoT universe did their thing and spread the word about this much-anticipated partnership. 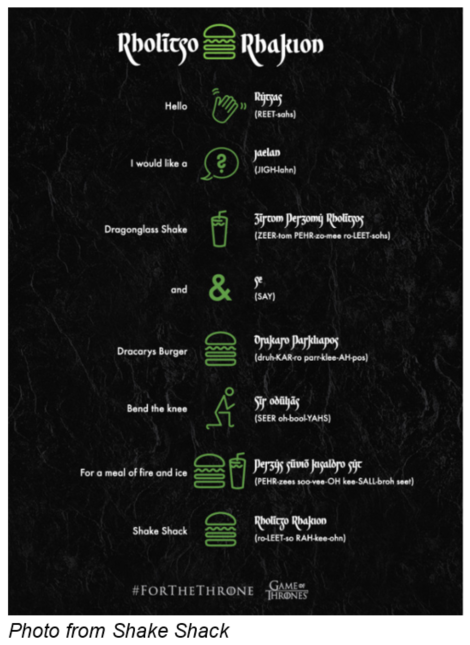 Oreo And Shake Shack Target Superfans With Their GoT Collaborations

It’s safe to assume many GoT fans are fluent in Valyrian and will have no trouble sidling up to the Madison Park, NY, Shake Shack location to order a specialty GoT burger and shake in the dragon language. It’s the only way to score these tasty creations, so if you require a brush-up, Shake Shack is offering a handy pronunciation guide.

Likewise, Oreo released a limited-edition pack of GoT cookies. The black packaging features all four Great Houses from the first season and is available broadly. The Oreos x GoT collaboration was launched via a re-creation of the series’ original opening sequence fashioned entirely out of Oreos. Superfans will relish the details.

Game of Thrones Takes Over The Iconic Fountains At The Bellagio

An MGM x HBO partnership has turned the famous Fountains of Bellagio into a four-minute Game of Thrones light and sound show which incorporates pyrotechnics and massive projections into the 800-fountain experience. According to Variety, GoT composer Ramin Djawadi created an original score and worked with the fountains’ original designers to create the show. “Through a series of special effects, Lake Bellagio is set ablaze and then turned to ‘ice,’ while dragons soar through the crashing waves, and illuminated water jets reveal the outline of the crown and Iron Throne, projected against a wall of water.”

Mountain Dew has introduced a limited-edition can inspired by fan-fave Arya Stark. What appears to be a plain white can without an identity – like the Faceless Men (nameless assassins of Braavos) – actually reveals Arya’s past and future kill list as it chills. It’s pretty “cool,” and particularly exciting to fans who are expected to parse the list to see if it offers clues about who will end up on the throne once the dust settles.

Fans who want cans sent to them can enter the GoT x Mountain Dew Twitter giveaway by using the hashtags #ACanHasNoName, #ForTheThrone and #MTNDEWsweepstakes when they share what they are willing to sacrifice in order to get their hands on one of these special edition Mountain Dew cans. Or, in an integration of social and outdoor advertising, fans can instead follow clues found on Mountain Dew’s social channels to discover novelty Iron Vending Machines that dispense the exclusive cans in Los Angeles and New York City. 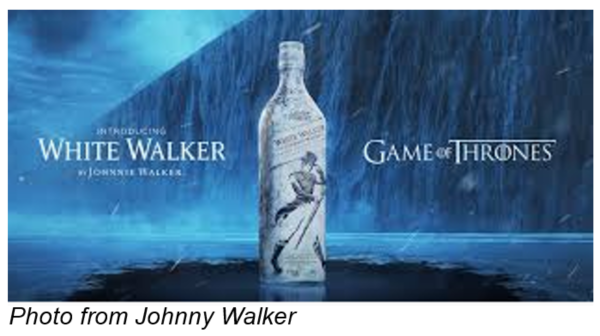 To similar effect, Johnnie Walker has released an exclusive spirit, White Walker, packaged in an icy blue sleeve reminiscent of life and death beyond the Wall. As the bottle chills, a hidden design is revealed. Naturally, this blended Scotch whisky is best served over ice.

What Is Dead Will Never Die

Although GoT is coming to an end, its connection to its passionate viewing audience will go on. If you are looking for even more GoT inspiration, check out, “Six Lessons Marketers Can Learn from Game of Thrones.” And so, our watch begins.