The GE&D study illustrated significant declines in enrollment among higher and moderate research institutions (R2 and R3) and master’s colleges and universities.

According to analysis in the GE&D study, these falling enrollments, in addition to declining or stagnant enrollments by American students, could paint a difficult picture for the future of graduate programs.

There Is Good News For R1 Doctoral Universities

The sharp decline in program enrollments often populated by international students reached double digits at R2 and R3 institutions, in some cases. For example, international enrollments in doctoral education programs dropped 24.5% between fall of 2016 and fall of 2017, leaving their average enrollment change per year at negative 4.9% for the fall 2012 through fall 2017 period.

Fortunately, programs that are more popular for international students are bucking the trend. Enrollment for engineering programs fell 23.6% between fall 2016 and fall 2017, but engineering enrollments for the 2012-2017 period are up an average of 5.1% annually. 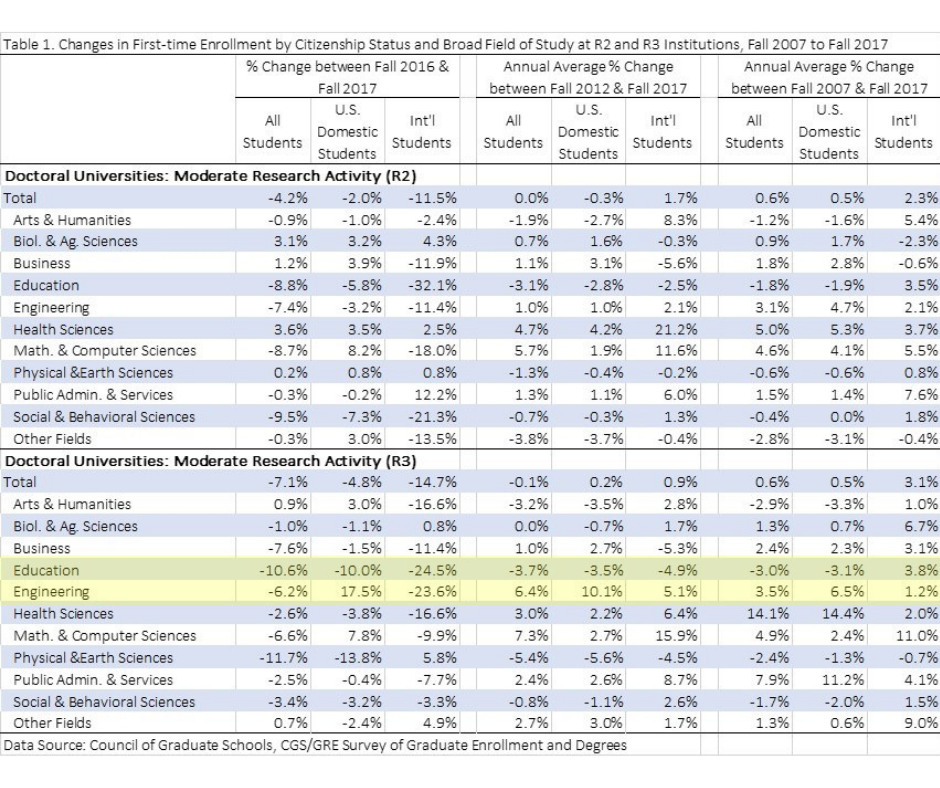 International Student Enrollments Are Slowing For All Levels Of U.S Based Higher Education

New data from the annual Open Doors survey, which is supported by the Bureau of Educational and Cultural Affairs at the U.S. Department of State, found that enrollments of international students fell by 6.6% in academic year 2017-18 across the board at U.S higher education institutions. The reasons for the drop in enrollments are mixed, but institutional characteristics like geography seem to emphasize enrollment declines. Colleges and universities in the south central region of the country and schools that are less selective are struggling more to recruit international students, while schools on the coasts have seen less of an enrollment decline.

Cost, quality, access and diversity also appear to be deciding factors for international students considering college in the U.S. Concerns about the political climate in the U.S. and competition from other countries is also growing. For example, South Korea sends the third most students to study in the U.S, but South Korean enrollments at U.S. schools have fallen the last seven years, most recently by 7%. This may be attributable to the improved quality of South Korean higher education.

How Universities Can Begin To Scale International Enrollments Again

The GE&D study offers several approaches for U.S. higher education institutions to consider when approaching their drops in international enrollment. The first step may be understanding what internal dynamics could have changed enrollment volume, including relying too heavily on students from certain countries and not adapting to international competitors. When demand changes, recruitment innovations, assistance with tuition and competitive positioning against schools with similar programs can be critical to turning the tide on international enrollments.

Reimagine Your Next Steps In Education Marketing

Contact DMS today to learn more about what DMS Education can do for you.