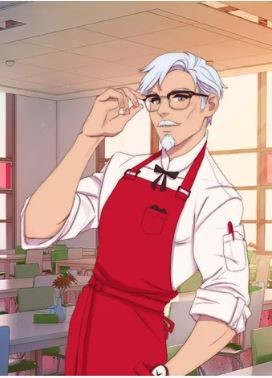 From Dirty Dancing with Mrs. Butterworth to bucket-of-chicken themed hot tubs, KFC has been pulling out all the stops with their full-on marketing juggernaut over the last several years. But one thing they haven’t done is introduce a hunky, anime Colonel Sanders in a dating simulator. Until now. I Love You, Colonel Sanders! A Finger Lickin’ Good Dating Simulator, set to be released on September 24th, follows a studious culinary student on her quest to date the Colonel, and hopefully get her degree in the process.

According to Steam, where the game will be available for free to users, the culinary student in hot pursuit of hunky Colonel Sanders will be joined by other “lovable characters” who compete in cooking battles and actual battles, enjoy tiny food and share secrets. While, it may seem a strange choice for a fried chicken franchise, the Dating Simulator isn’t KFC’s first foray into video games. When reintroducing the Colonel to younger audiences, KFC debuted an 8-bit videogame that shared the many iterations of the Colonel with new fans, and, according to Polygon, “In 2018, KFC launched a gaming Twitter account called KFC Gaming. The social media account is all over the place, hurling memes and video clips all across the internet.”

Yum! Brands, which includes Taco Bell, Pizza Hut and KFC, has seen sales growth from their bold marketing campaigns. Of the Dirty Dancing campaign, Greg Creed, Yum! Brands CEO, said, “KFC's bold and cheeky marketing uniquely accentuated the delicious pairing to help KFC U.S. deliver its strongest month of same-store sales growth for the year. With continued focus on value and innovation, we're excited for what 2019 has in store for this always original brand.” The I Love You, Colonel Sanders! A Finger Lickin’ Good Dating Simulator is another way for the brand to continue pushing their marketing forward on all channels – social has been big deal for chicken franchises lately – in the unexpected way their fans have come to expect.