The restaurant industry is one of the sectors most gravely impacted by the coronavirus pandemic. Many restaurants shuttered or closed temporarily, but others adapted to take-out only policies that continue to provide revenue and employ staff. "It doesn't matter if you're a big chain or a small corner diner, you're seeing the impact immediately," said Sean Kennedy, a spokesman for the National Restaurant Association.

Several restaurants pivoted to offering meal kits of their most popular items or engaging audiences with ad campaigns encouraging people stuck at home to learn how to make signature recipes. 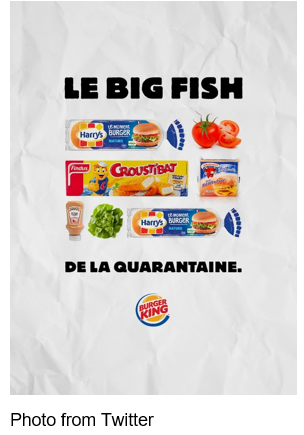 A recent Forbes article pointed out how difficult it is to launch current ad campaigns while “navigating a new reality that is in constant flux.” However, Burger King France has found an ingenious way to advertise their most well-known products and reinforce the need to stay home — carefully straddling the tricky issues that may make it difficult to advertise right now.

The ads neatly display the necessary ingredients to make a number of Burger King favorites and the order ingredients should be stacked on the sandwich. Burger King France deployed the ads on Twitter and Instagram, accompanied by short videos that explain how to to make Le Whopper, Le Steakhouse (a bacon cheeseburger) and Le Big Fish, which dropped last Friday for Lenten observers. In response to the clever campaign, Burger King France’s followers shared their own quarantine burgers on social media.

Similarly, McDonald’s UK shared the recipe for their Sausage McMuffin with Egg on Twitter and encouraged their followers to tweet their own creations.

Disney parks around the world have been forced to close temporarily during the COVID-19 crisis, but Disney wants their loyal fans to have a taste of the “happiest place on earth” while self-isolating. Disney posted their official churro recipe and how-to video on the Disney Parks Blog, and Disney’s Food & Beverage Communications Coordinator Alex Dunlap said, “These past few weeks, we’ve seen many of you sharing Disney recipes and creating your very own magical moments right at home. This has inspired us to share one of my favorite recipes so you can continue creating #DisneyMagicMoments.”

Shake Shack Partners With GoldBelly To Sell Their Famous Burgers 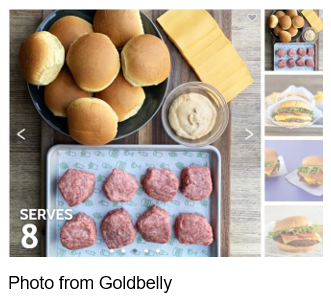 For less than $60, Shake Shake fans can enjoy make-your-own kits of eight gourmet Shack patties, cheese, rolls and special sauce (veggie toppings not included) from gourmet food purveyor Goldbelly. “We’re thrilled to make Shake Shack more accessible during these challenging times and offer our guests the ability to recreate the Shack experience in their own homes,” said Mark Rosati, Shake Shack Culinary Director. Shake Shack recommends eating their meal-kit burgers within a few days of receiving them, instead of freezing them.

Adam Goldman, a Dunkin franchisee, recently sold 500 make-your-own doughnut kits at his West Orange, New Jersey location. The kit is $9.99 and includes six plain donuts with three icing flavors and a cup of rainbow sprinkles. Goldman was pleasantly surprised by how successful the campaign was, initially intending to only sell 40-50 kits. “We’re doing our absolute best to try to keep as many of our employees working who want to be,” said Goldman. Adding, “Our employees are like a big family to us, and at the same time, hopefully, people will have some fun with [the kits].”

Other local restaurants around the country still doing carry-out sales are also creating meal kits for customers. Pizza parlor Tony Baloney’s is also hosting virtual classes on how to make pizza, fresh mozzarella and meatballs for customers who buy their custom how-to kits.

Brands that think creatively during this unforeseen global crisis, while respecting their consumers and staff, may earn more appreciation from the public now and in the future.