How Does The OneView Ad Platform Benefit Digital Marketers?

As streaming becomes the dominant source of entertainment around the globe, advertisers are moving much of their traditional TV budgets to OTT. The need for programmatic, measured and scalable advertising opportunities across screens is more important than ever.

The OneView Ad Platform combines Roku’s first-party data from 39 million U.S. households and dataxu’s cross-device identity graph into a single platform, which, according to Roku will “manage advertising – across OTT, desktop and mobile campaigns – that reaches an estimated four in five homes in the U.S.” Adding, “OneView Ad Platform integrates the reach, inventor, and capabilities of Roku advertising with the identity and attribution tools of demand-side platform dataxu.” 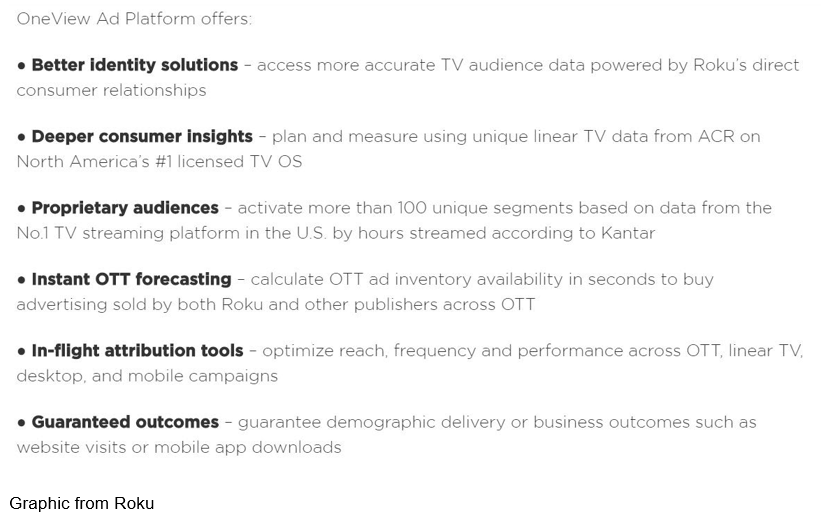 AdExchanger notes, “campaigns on OneView also won’t return ad IDs from Roku devices, as typical programmatic campaigns would, since those ads use Roku first-party user data, and thus advertisers would be able to create segments and retarget Roku users without consent.” However, “Advertisers can use third-party measurement, verification and ad-serving services like Nielsen, Oracle Data Cloud or Innovid.”

Does The Roku OneView Platform Work With Other DSPs?

An article in AdExchanger explains that advertisers using other DSPs will be able to buy Roku inventory, but without the guaranteed outcomes that OneView offers.

“We are a consumer-first product,” said Alison Levin Roku, VP of Ad Sales and Strategy at Roku. “A reason this DSP made so much sense during acquisition was it would allow brands to access those audiences and measure against them in a controlled environment.” Leveraging Roku’s household data in OneView to create optimized, targeted campaigns is a benefit of the platform, allowing advertisers to drive targeted cohorts to specific CTAs.

Advertisers who have signed on for The OneView Platform launch include Drizly, Experian, Intuit TurboTax and Lexus, among others.

Looking To Boost Your Consumer Engagement?