Twitter recently began beta testing “branded likes,” which encourage Twitter users to share and like hashtag campaigns with a bit of extra visual bling from brands. “We know that some of the best brand moments deserve a little spark and delight,” said a Twitter spokesperson.

AdAge explains, “Brands choose hashtags that can trigger branded likes in organic and promoted tweets for a period of 24 hours. Users who click or tap the posts, receive a surprise animation and can then enable the feature in their own posts when they use the hashtag themselves.” With branded likes, brands can add animations to “likes” that work in tandem with hashtag campaigns and other campaign imagery.

How Can Brands Activate The New Branded Like Option? 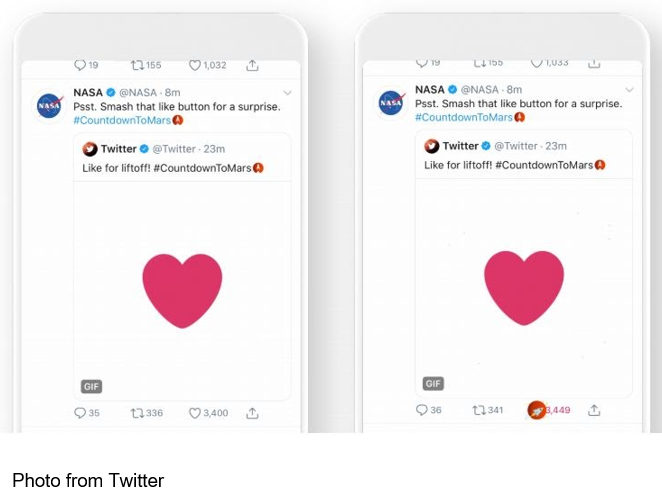 Currently, interested brands in the U.S. and Japan can access branded likes in Twitter’s First View platform. (First View allows brands to choose the top spot in users’ timelines for video-based promotions.) Brands select a hashtag that activates the branded like, and then have the option to choose whether to pair the activation with a First View “Promoted Trend” or “Promoted Trend Spotlight.” Once posted, users can share the post with the hashtag to see the animated “like” in action on their own Twitter feeds.
How Are Branded Likes Relevant For Digital Marketers?

NASA, the NBA and Disney have tried out branded likes so far. According to AdAge, “NASA used an animated rocket ship as a branded like with the hashtag #CountdownToMars to celebrate the Thursday launch of its latest rover to Mars. And on Thursday, the NBA used a bouncing basketball as a Branded Like with the hashtag #WholeNewgame to promote the basketball season’s opening night.” Adding, “Twitter users have noticed the new feature and have been using the branded like-enabled hashtags to make their own tweets come alive.” Disney is the first brand to pay for their branded likes as part of the ad product beta test, using the effect to promote Beyonce’s “Black is King” visual album. Twitter hasn’t disclosed the cost of the branded likes feature.

In addition to driving engagement on Twitter, hashtag campaigns could boost conversion rates because they can effectively communicate calls to action. By including branded likes, brands add an additional incentive and bring a little fun and unexpected “spark” to the typical hashtag promotion.