Since its debut on PBS in 1991, the Where In The World Is Carmen Sandiego (WITWICS) gameshow for tweens has enjoyed a loyal following. Even after going off the air in 1996, many viewers of a certain age still fondly remember the catchy theme song, and hopefully some of the geographical facts WITWICS was trying to impart.

The educational entertainment of WITWICS began with video games in 1985. While sending players on missions around the globe to track down ne’er do wells, with the ultimate goal of catching Carmen herself, players had the opportunity to learn geography and about famous places throughout the world. A slick new series and innovative game have recently launched, bringing WITWICS to today’s audience. 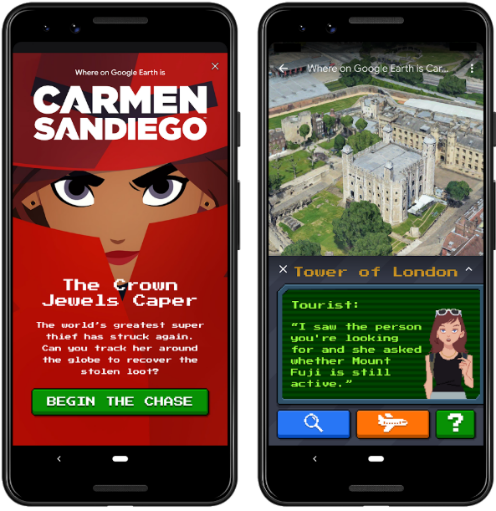 Netflix recently launched Carmen Sandiego, an animated new series that offers an origin story to the famous super-thief, framing her as a damaged anti-hero out to catch the real bad guys. As part of a promotion to boost the series, Google Earth partnered with Houghton Mifflin Harcourt (HMH), the company that owns the Carmen Sandiego license, to create The Crown Jewels Caper, the first in a series of Carmen Sandiego games in Google Earth.

“Our game is an homage to the original. It’s for all those gumshoes who grew up with the chase, and for the next generation feeling that geography itch for the first time,” said Google Earth Program Manager Vanessa Schneider.

While the Netflix series skews slightly older and is probably more interesting for tweens and teens, the game is a charming throwback to the original WITWICS with fun facts for kids of all ages. The pixel art of the characters is similar in design to the original video games and, when paired with the astonishing 3D technology of Google Earth, the collaboration offers entertainment and education for parents and kids.

Similar to the game Gen Xers remember from their youth, players receive assignments from spy headquarters, tasking them with identifying landmarks, chatting with locals and jetting off to the next adventures. Sadly, Carmen is almost always just out of reach. The game can be played on Chrome, Android and IOS.