Disney has launched a new era of intergalactic missions since purchasing the Star Wars franchise from Lucas Films in 2012. With films, park attractions and supporting apps, Disney encapsulates the joy and fantasy of Star Wars while engaging consumers through a branded digital platform.

Over the past seven years, Disney produced three Star Wars films, The Force Awakens, Rogue One and The Last Jedi, which brought in a combined almost $4.2 billion worldwide, according to Quartz. Disney bought the franchise for $4.05 billion, meaning the entertainment brand already made their money back with their first three films.

In addition to more than $200 million budgets, Disney tacked aggressive marketing campaigns onto each film.

Disney focused on different beloved characters throughout different elements of marketing. AdWeek noted, “While ‘Where’s Luke?’ was the question of the marketing for The Force Awakens, ‘#WheresRey’ was the question of the consumer products campaign.” With this latter initiative, in a time when female representation is crucial and can directly cause a positive impact on revenue and box office results, Disney focused on highlighting Rey, the main female character, and promoted the character’s femininity as tough and unparalleled.

Disney’s marketing is known to go above and beyond, resonating with diverse audience groups and intriguing new consumers regularly.

Disney is introducing Star Wars: Galaxy’s Edge to their parks, capitalizing on their ownership and the clout of the Star Wars franchise. Available May 31 at Disneyland and August 29 at Disney World, the attractions will be 14 acres across each of the parks.

Star Wars: Galaxy’s Edge at Disney World and Disneyland will transport fans to planet Bantu, indulging them by bringing their favorite fantasy world to life. With restaurants, shops, depots and places to build custom lightsabers, there are adventures for every consumer. 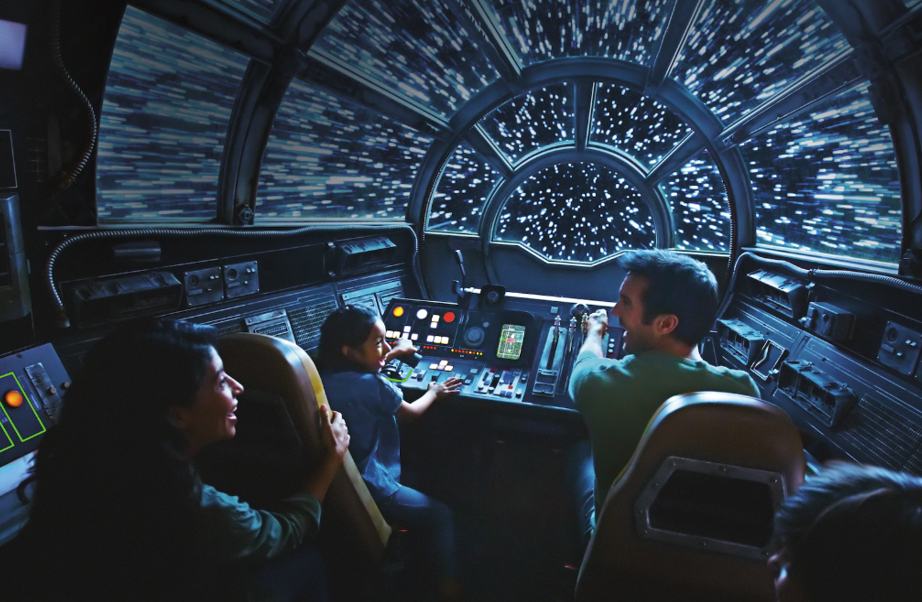 This interactive space-traveling attraction allows park visitors to get behind the controls of the infamous Millennium Falcon. With three different experience options, visitors can be pilots, engineers or gunners onboard the ship. Fans will need to work together to successfully complete their missions.

Star Wars: Rise Of The Resistance

The second main attraction coming soon to Disney parks is called Star Wars: Rise of the Resistance, which Disney markets as “one of the most advanced and immersive experiences ever undertaken by Walt Disney Imagineering.” At this attraction, park guests will take part in an iconic battle against the First Order, a military dictatorship best known for its fighters, the Stormtroopers.

Available just in time for the new parks attractions, the Play Disney Parks app will launch a new tool for consumers to use while preparing for and experiencing Star Wars: Galaxy’s Edge. According to Disney, the app will aid park visitors and fans by:

When using the app, visitors can pledge their allegiance to the First Order, join the Resistance or even stand by themselves as scoundrels. Visitors can complete jobs around Star Wars: Galaxy’s Edge to gain rewards including ship schematics, maps and galactic credits.

The Play Disney Parks app encourages consumers to interact with both the Star Wars and Disney brands and attractions even before arriving at the park. Disney intrigues consumers by adding personalized digital components to their experiences.