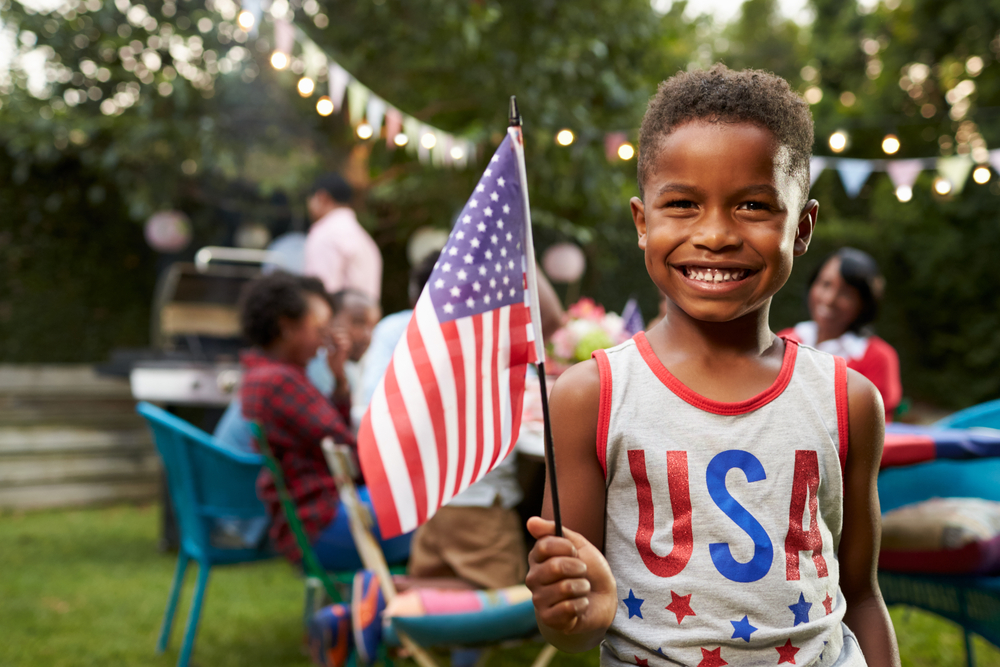 What has long been known as the hallmark of the summer season, Fourth of July celebrations open the door for brands to reach consumers in light-hearted and creative ways. Throughout recent years, many major brands have seen great success in expanding their audience reach and improving brand awareness through the launch of festive and engaging Independence Day campaigns.

Last Year, Skyy Vodka partnered with WWE superstar John Cena in a social media photo-submission campaign called #SparkChange. The campaign encouraged Instagram, Twitter and Facebook users to share their “imperfect” firework photos using the #SKYYVodka hashtag.​ For every submission, Skyy Vodka vowed to donate $5 (up to $100,000) to the National Diversity Council, which is dedicated to advocating for multicultural environments across U.S. businesses. The #SparkChange campaign was created to promote diversity and inclusion during consumers’ Fourth of July celebrations, with the liquor brand calling it “a humorous, digital call-to-activism offering consumers an opportunity to do some good with their less-than-perfect firework photos.”

Through the #SparkChange campaign, Skyy Vodka was able to access Cena’s massive social media following while tapping into the rising appreciation among younger consumers for cause-driven marketing. As Mobile Marketer noted, cause-driven efforts create “an emotional bond that can help to drive longer-term loyalty and distinguish brands from competitors.” 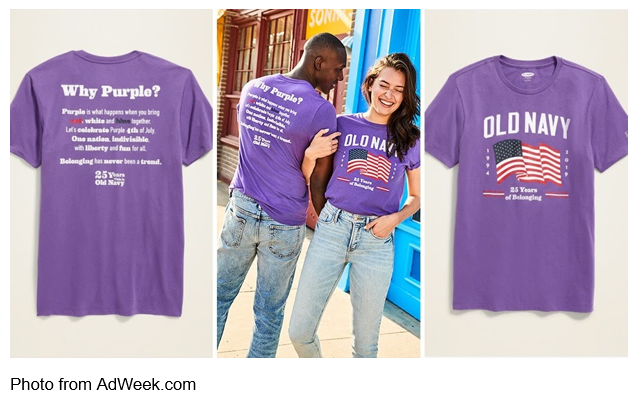 Old Navy’s 2019 Independence Day campaign combined the symbolic red, white and blue colors of the American flag to create a line of purple t-shirts representing unity among the country’s two main political parties. “With its logo shaded purple through the holiday, the company will sell a limited batch of 1,994 shirts — a nod to its 1994 birthday — in addition to opening a digital pop-up full of other purple items,” Adweek shared.

Old Navy also pledged to donate $25,000 to Open To All, a national nondiscrimination campaign. “One thing is certain, we will never stop believing that Old Navy can be a place where customers and communities feel a sense of belonging – and do our best to make that so,” said Old Navy President and CEO Sonia Syngal. “Our doors are open for everyone, and also open for ideas, open for love, open for differences, open for dialogue, and open for change.”

Smirnoff Ice’s 2018 Fourth of July promotion relied heavily on the power of social media to engage with its audience. Through the holiday campaign, Smirnoff encouraged followers to tag @SmirnoffUS on social media and “share how they would celebrate Independence Day if they had an extended weekend,” noted MarketingDive. However, Smirnoff took the campaign one step further, selecting 100 participants and paying for each person to take off from work July 5-6. Using the tagline, “Dear America, Tell your boss you're taking a 5 day weekend for America,” Smirnoff took the comedic route to interact with its audience, poking fun at the inconvenience of the holiday falling on a Wednesday.

Walmart Kept It Simple On Social 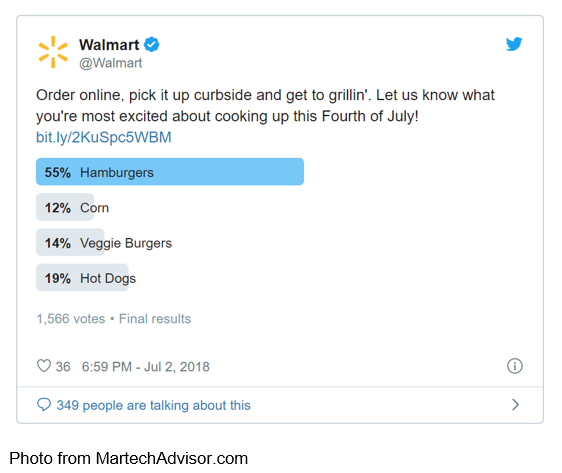 Sometimes, when it comes to engaging with consumers, the “less is more” saying can be effective. In 2018, Walmart proved that theory with its Fourth of July social media efforts, interacting with its audience through a quick and simple Twitter poll. Understanding that much of Fourth of July celebrations center around a BBQ or some type of outdoor get together, Walmart asked consumers what they’re planning to cook up on Independence Day, while strategically reminding their audience of Walmart’s convenient option to order online with curbside pickup.

In an interesting twist, Budweiser this year combined its marketing efforts to honor two patriotic holidays — Memorial Day and Independence Day. Called “Taste of Freedom,” Budweiser’s campaign introduced three limited-edition cans which, according to MarketingDive, “honor the five branches of the U.S. Military.”

Additionally, “For every case sold between Memorial Day and the Fourth of July, Budweiser will donate $1 to the military charity Folds of Honor,” MarketingDive shared. Beer sales have continued to rise since the start of the pandemic, with revenue reaching $983 million as of May 9th, the “highest sales week since the Fourth of July last year,” according to recent research from Nielsen.

This Year’s Independence Day Celebrations May Introduce An Unprecedented Experience 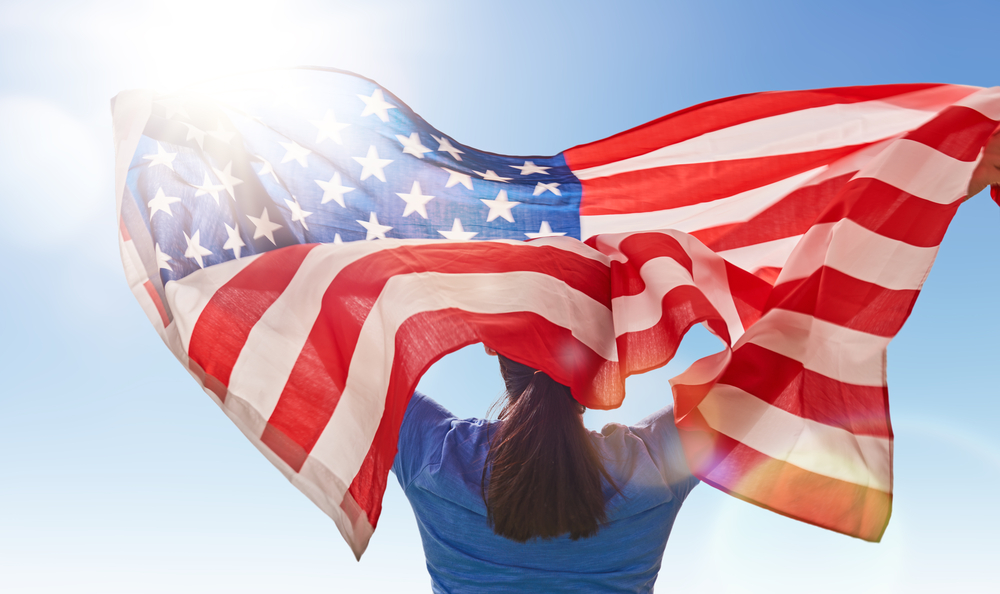 In 2019, 86% of Americans stated plans to celebrate Fourth of July, 26% planned to purchase additional “patriotic items” and, overall, consumers were expected to spend $6.7 billion on food items, according to NRF’s Annual Fourth of July Survey. 2020, however, has seen a slew of global shifts and reactive marketing strategies, and has the potential to see a far different Fourth of July celebration from years past.

With many parades, fireworks displays and similar events opting to transition to fully virtual events – and some even canceling long-time events with a more than 225 year history – brands should be preparing to launch campaigns that resonate with today’s climate. While many consumers are surely still preparing to shop holiday sales and prepare for family BBQ’s, brands must be able to pivot their marketing efforts in order to drive revenue during an unprecedented time. 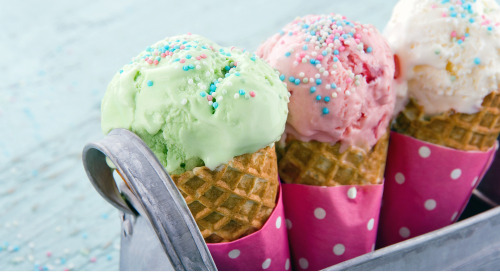 Many ice cream brands have launched fun campaigns to get kids — and adults — in the mood for everyone’s fav... 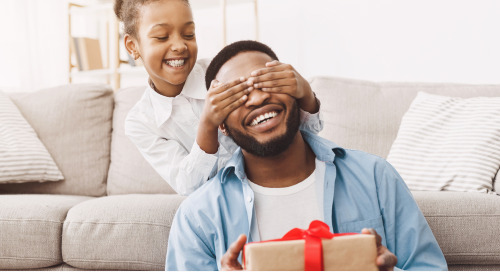 As the effects from the pandemic linger and consumers' ideas of what the “dad” role looks like evolves, bra...