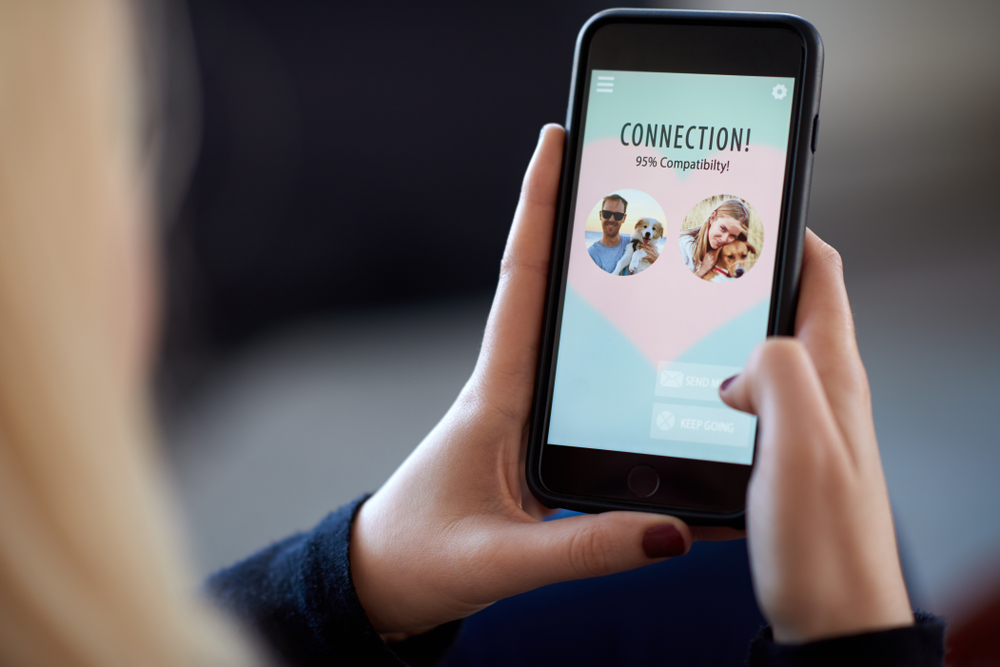 Today, dating apps have become the norm, with Tinder, Bumble, Hinge, OKCupid, Match, eharmony, Zoosk… the options are endless. But the acceptance of this modern day match-making tactic wasn’t always there. What was once looked at as a stigma has become socially acceptable and often the preferred way of meeting new people.

The rise of the internet and, more specifically, dating apps seemingly replaced the roles that family and friends once played in bringing couples together. And while the hype surrounding dating apps has slowed, the opportunities for marketers to promote their brands are still strong.

Dating Apps By The Numbers

Between 2009 and 2017, almost 40% of heterosexual couples met online, and, according to Match Group spokesperson, Justine Sacco, half of all singles in the U.S. use or have tried a dating app.

Some insightful facts about dating apps:

What Does The Future Of Online Dating Look Like? 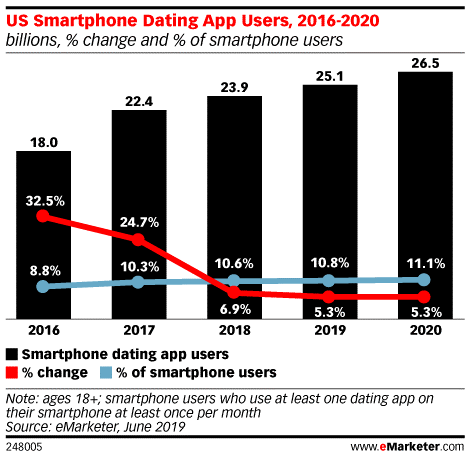 The stigma toward dating apps has almost entirely disappeared, and these platforms have become the new norm for meeting and connecting with other singles. However, new research from eMarketer shows a decline in growth among the most popular dating apps and predicts the number of people who own smartphones and use dating apps to grow just 5.3% in 2019, down from their original prediction of 9.8%. This decline is assumed to be the result of two factors: an increase in successful relationships and a rise in app-switching — an alternative to new app downloads.

Although more than 25 million people are expected to regularly turn to dating apps this year, analysts are predicting a continued slow-down in growth for many popular dating apps.

While the speedy incline in dating apps is not what it once was, the industry as a whole is still seeing revenue climb. Between February 2018 and February 2019, the top 10 dating apps in the U.S. saw roughly $679 million in consumer spending, with industry-leaders like Tinder increasing its revenue by 62% and Bumble growing by 135%.

Don’t let the declining statistics fool you, the dating app industry is still a massive arena digital marketers can tap into. A growing population and the continued normalcy of dating app usage can quickly turn the numbers around, plus, the benefits of using a dating app have remained the same for consumers — dating apps are convenient, accessible on-the-go and provide users with an overflow of information.

Pairing the convenience factor with the world’s timeless quest for love, dating apps are a digital marketer’s playground, with an expansive user base and endless marketing opportunities. Apps like Tinder are especially tempting for marketers, since the app’s infrastructure allows brands to target specific age demographics. For example, brands can select their ads to appear only to users who had self-identified as 20-25, 31-36, etc. App users are exposed to these targeted brand advertisements between swipes and connections on the free versions of each platform.

As dating apps become less and less of a discrete activity and become better at connecting users to those nearby, and as the stigma surrounding online dating and dating apps continues to decrease, marketers may notice a natural rise in increased adoption and new opportunities for their brands. Let’s not forget, half of all U.S. online users have met or know someone who has met a romantic partner on a dating website or app, so the time is now for marketers to capitalize on the growth potential within the online dating industry.