Reddit Talk is the latest social audio feature to launch in 2021. Following the lead of Twitter, LinkedIn and Facebook, Reddit introduced its social audio tool to create a new space for Reddit users to gather and chat. According to Statista, “nearly 1.74 billion visits were measured to the online forum [in December 2020], making it [Reddit] one of the most-visited websites online.” Given the reach of Reddit, Reddit Talk could provide a unique opportunity for advertisers to reach large audiences, although advertising opportunities remain TBD. 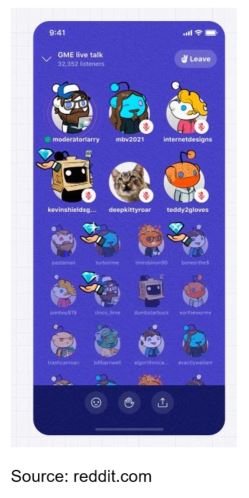 Although not widely available yet, Reddit Talk is for “whatever [Reddit] communities want to use it for,” explained the social platform’s announcement about the feature. “You can start talks for Q&As, AMAs [ask me anything, an interactive Q&A coined by Reddit], lectures, sports-radio-style discussions, community feedback sessions, or simply to give community members a place to hang out.”

Initially, only moderators of subreddits, AKA Reddit communities, will be able to start a talk, although anyone can join in once it’s up and running. Those listening to conversations on Reddit Talk can react with emojis or just listen quietly. If they want to speak, they can raise their hands, and the moderator may invite them to chime in to the talk. As with most of the new audio formats, the Reddit Talk moderator can also mute anyone or kick them out and keep them from coming back, presumably for violating community guidelines, although Reddit isn’t entirely clear on that. Eventually, moderators will be able to invite “trusted speakers” to co-host, very much in the Twitter Spaces and Clubhouse style. For now, moderators interested in getting a “sneak preview” of Reddit Talk will need to join a waiting list.

How Is Reddit Talk Different Than Its Social Audio Competitors?

According to Reddit, the platform would like to personalize talks “through emojis and background colors.” And, “Redditors can change their avatar's appearance to fit the talk as well.” Down the road, Reddit would like Reddit Talk to “support AMAs and other types of conversations.”

It’s a bit of rinse, wash and repeat with all the social audio formats launching, particularly since most platforms aren’t clear about when or if they will allow ads. Most social audio platforms have emerged as competitors to Clubhouse in hopes of keeping users where they are already posting, sparring and networking.

Down the road, if and when Reddit Talk offers advertising opportunities, the more users that stick around on a platform, like Reddit, the better it can be for advertisers looking to reach large audiences.