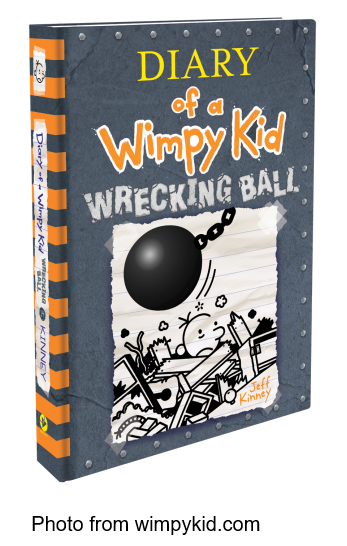 Promotions for the recent release of Diary of a Wimpy Kid 14: Wrecking Ball include digital content that fans of the hugely popular series can share on social media. Jeff Kinney’s graphic novels about an awkward middle-school boy named Greg, have been delighting kids since 2004, with more than 200 million books sold around the world. The addition of social augmented reality (AR) and digital stickers is likely to increase excitement about the latest series’ installment among the already very tech-centered audience who read Kinney’s books.

“I’ve loved seeing fans around the globe engage with the 'Wimpy Kid' brand using our existing emoji-style stickers. This year, we wanted to expand the 'Wimpy Kid' universe and I’m thrilled to have the brand-new augmented reality and sticker formats on major global platforms. I’m really looking forward to seeing where Greg can go with his fans in 2020!” said Kinney.

Although some kids may be too young to use the new “Wimpy Kid” digital activations, for middle school kids excited about “Wrecking Ball” the new digital content lets them engage with other readers over social media. According to the press release about the AR activation, “The AR effects offer users the ability to insert a swinging virtual wrecking ball into their camera scene and then wreck, record, and share a real world scene of their choice. The AR filters are available to engage 'Wimpy Kid' fans on popular messaging platforms, Facebook and Instagram, and as an AR lens on Snapchat.” The digital promotions will also include digital stickers based on illustrations of the characters in "Wimpy Kid" books, which fans can share in Baidu's Facemoji keyboard app.

AR Is Becoming An Increasingly Popular Way To Diversify Promotions

More and more marketing campaigns are beginning to feature innovative and interactive digital technologies like AR. AR and VR are expected to be a more than $18 billion industry in 2020, featured in multichannel brand campaigns for TV, film, books and across optimized branding strategies. According to the agency responsible for the “Wimpy Kid” digital activations, “Augmented reality is a great marketing platform for brands to engage audiences, and a perfect fit for the 'Wimpy Kid' fanbase to create and share their special moments.”

Are You Looking For Unique Opportunities To Make A Positive Impact?

At Digital Media Solutions® (DMS), we help companies grow so we can drive meaningful change in the world. Our core business supports our efforts to take action, lead by example and encourage those around us to positively impact their local and global communities.