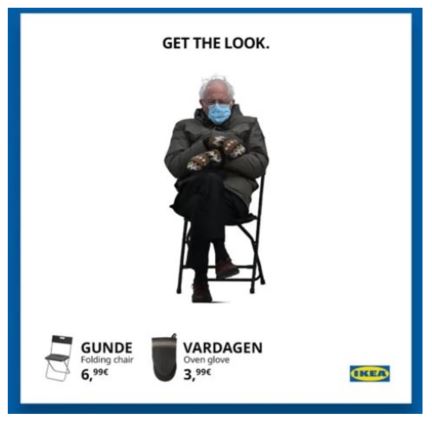 Recently, because he chose to wear comfy mittens and a big coat to the inauguration, Senator Bernie Sanders was memed across the internet. And, as swiftly as the memes spread across every platform, they faded away. Despite the short-lived nature of the Bernie-meme fun, some brands, like Ikea, were able to quickly incorporate the meme into their messaging.

When using memes in advertising, brands need to be very timely and make sure the memes they hitch their wagons to are still relevant. After all, there’s nothing worse than your target audience believing your brand is lame or late to the game.

“Memes are a fun way to enter of-the-moment conversations and jump on the bandwagon of the cultural zeitgeist. They’re a way to show that a brand ‘gets it,’” said Sarah Aitken, CMO of Holler, a technology company that helps marketers leverage memes to connect with audiences. During the pandemic, meme usage appears to have escalated. In fact, a survey of U.S. and UK internet users found that, “In May, memes were the third-most shared type of content on social media, behind only personal news and funny videos.”

Who Is Responding To Memes In Advertising?

In an eMarketer article about the benefits of using memes for advertising, writer Jasmine Enberg reported that memes are still primarily enjoyed by younger audiences. “Young generations are bigger meme aficionados than older people are… for instance, 54% of U.S. and UK internet users ages 16 to 23 said they had looked at a meme on the day of the survey, as had 41% of those ages 24 to 37. Meanwhile, just 21% of those ages 38 to 56, and 9% of those ages 57 to 64, had done the same.” Younger audiences can be a notoriously tough group to please, so savvy social media managers should know the language and trends to use when creating memes, keeping eye-rolling to a minimum.

How Can Brands Effectively Leverage Memes?

By tapping into a popular cultural moment effectively through the use of memes, brands can achieve brand awareness and increase engagement. By being funny or clever, in a timely way, brands develop familiarity with consumers while generating memorable and emotional reactions. Brands including McDonald’s, Apple, Barkbox and Ruffles have all used memes as part of advertising campaigns.

Important to note: Brands should stay away from memes that could be deemed inappropriate. And, if a brand’s audience isn’t the right target market or likely wouldn’t “get it,” memes are usually not a good idea. “Not only do brands risk offending people, given that humor is subjective, but marketers also have to worry about being labeled ‘cringey’ for seemingly trying too hard or hopping on a trend too late in the game,” explains Enberg.

Memes are a fun and funny way to connect with consumers, leverage popular moments in pop culture and generate buzz on social channels. As a part of larger multichannel strategies, meme marketing can be a creative way to advertise new products or create high-level engagement.